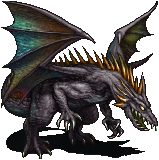 As a standard action, a black dragon howls, all creatures within a 300-foot spread except evil outsiders must succeed at a DC 27 Will save or become panicked for 1d4 rounds. This is a sonic, mind-affecting fear effect. A creature that successfully saves cannot be affected by the same black dragon’s fearful bay for 24 hours. This is a mind-affecting fear effect. Blue mages may learn this ability as a 4th level spell (Knowledge: Arcana DC 23).

Once every 1d4 rounds as a standard action, a black dragon pours a cloud of black and magenta mist, robbing enemies of their strength. All enemies in a 45 ft. cone take 12d8 points of non-elemental damage (DC 27 Reflex save for half damage) and are subjected to a targeted greater dispel effect, using Yomi’s HD in place of a caster level. Enemies that failed the Reflex save must also make a Fortitude save (DC 27) or be afflicted with the Disease status effect until cured, and suffer the Sap status effect for 1d6 minutes. Success results in being Poisoned for 1d6 rounds instead. Blue mages may learn this ability as a 8th-level spell (Knowledge: Arcana DC 31).

Once every 1d2 rounds as a standard action, the black dragon devours the sun, plunging the area into supernatural darkness for 1d4+1 rounds. This affects an area of 120 feet and cannot be dispelled except by a daylight spell. All creatures gain total concealment and vision equivalent to a hume in darkness. Blue mages may learn this ability as a 5th level spell (Knowledge: Arcana DC 25).

A black dragon can see perfectly in darkness of any kind, including that created by the blacklight spell.

Once every 1d3 rounds as a standard action, a black dragon sends off a blast of dark magic against her foes. This is a spell-like ability that functions like the Flare black magic spell except it deals shadow damage instead. It casts as a 19th-level black mage. Blue mages may learn this ability as a 6th level spell (Knowledge: Planes DC 27).