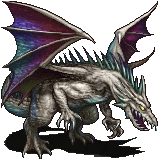 This mature adult dragon’s scales are a frosty white. Its head is crowned with slender horns, with a thin membrane stretched between them.

As a standard action, white dragons grants allies an icy barrier. All allies gain the effect of Ice Spikes, as the black magic spell. The allies must be within 30 feet of the white dragon, when he uses this ability, to receive these bonuses. Blue mages may learn this ability as a 4th level spell (Knowledge: Arcana DC 23).

Once every 1d2 rounds as a standard action, a white dragon roars an icy cone blast within 30-ft. burst. Any creature within the area of effect takes 10d6 points of ice damage and are inflicted with the Frozen status effect. A successful Reflex save (DC 27) reduces the damage by half and negates the status effect. Blue mages may learn this ability as a 5th level spell (Knowledge: Arana DC 25).

A white dragon can shape ice and snow at will. This ability functions as stone shape, but only targeting ice and snow, not stone. A white dragon’s caster level for this effect is equal to its Hit Dice.

This ability works like the spider climb spell, but the surfaces the dragon climbs must be icy. The dragon can move across icy surfaces without penalty and does not need to make Acrobatics checks to run or charge on ice.

Once every 1d4 rounds, a white dragon will summon a 30 ft.-radius blizzard in a select area completely freezing all those who fail their Fortitude save (DC 27). Every target can be trapped in solid ice 19 inches thick. If the creature fails its save, it is helpless, but can still breathe (the ice blocks line of effect to the target). If the target makes its save, it gains the entangled condition but can otherwise act normally. Whether or not the target saves, it takes 19 points of ice damage each round it is helpless or entangled in the ice.

The ice has hardness 0 and 57 hit points; if broken, the creature is freed. A creature can break the ice as a full-round action with a successful Strength check (DC 29) or Escape Artist skill check (DC 34). A white dragon will always start the fight with this ability. Blue mages may learn this ability as an 8th level spell (Knowledge: Arcana DC 31).

A white dragon learns to see perfectly in snowy conditions. A white dragon does not suffer any penalties to Perception checks while in snow.

Once every 1d3 rounds as a standard action, the white dragon can create a shredding flurry of icy slivers hitting all creatures within the 30-ft. line. Creatures in the area of effect take 14d6 points of ice damage are inflicted with Frozen status for 1d4 rounds, a successive Reflex save (DC 27) for half damage and negates status effect. Blue mages may learn this ability as a 6th level spell (Knowledge: Arcana DC 27).