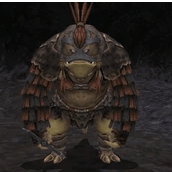 Orcs will throw anything that it engages as a way for it to make sure it is the victor. Orcs gain the Throw Anything feat.

Orcs are always proficient with greataxes and falchions, and treat any weapon with the word “orc” in its name as a martial weapon.