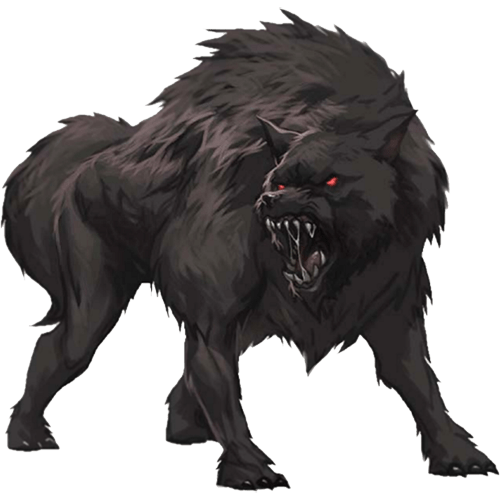 A wolf-like creature with sharp fangs that burn like hot coals, and thick black fur.

A black nakk can howl, granting him and his allies a +2 dodge bonus to AC and a +2 morale bonus to attack rolls for 1d6 rounds within a 15 foot-radius of himself. Blue mages can learn this ability as a 3rd level spell (Knowledge: Arcana DC 21).

3/day, a black nakk’s enhances herself or an ally with great magical strength within 40 feet. A black nakk gives one natural weapon or unarmed strike of the subject a +2 enhancement bonus on attack and damage rolls for 7 hours. The ability can affect a slam attack, fist, bite, or other natural weapon. This bonus does not allow a natural weapon or unarmed strike to bypass damage reduction aside from magic. Alternatively, you may imbue all of the creature’s natural weapons with a +1 enhancement bonus (regardless of your caster level). Blue mages can learn this ability as a 3rd level spell (Knowledge: Arcana DC 21).

A black nakk can howl with great veracity, entering a berserk-like rage for a full minute. While berserk, he gains a +6 bonus to Strength and, if he makes a full attack action, gains a single extra attack each round at his highest bonus. However, he also takes a –4 penalty to Armor Class and takes 2 points of nonlethal damage per round. This status effect causes the character to fly into a rage attacking the nearest creature. The subject cannot use any Charisma-, Dexterity-, or Intelligence-based skills (except for Acrobatics, Escape Artist, Intimidate, and Ride), or any abilities that require patience or concentration, nor can he cast spells or activate magic items that require a command word, a spell trigger (such as a materia), or spell completion to function. He can use any feat he has except Combat Expertise, item creation feats, and metamagic feats. Blue mages can learn this ability as a 5th level spell (Knowledge: Arcana DC 25).