These creatures are large, ugly, black birds. They resemble vultures with over-developed muscles. They are avian whose beak have regressed, turning into jagged teeth like those of a tyrant wyrm. 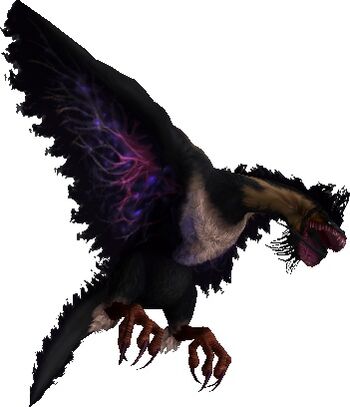 Due to their filthy eating habits and constant exposure to decaying flesh, zuus are harbingers of disease much more so than the standard zuu. Any creature bitten by a zuu has a 10% chance of being exposed to filth fever, blinding sickness, or a similar disease. Once this check is made, a victim can no longer be infected by this particular zuu, though attacks by different zuus are resolved normally and may result in multiple illnesses. While zuu aren’t immune to all disease, they do gain a +4 racial bonus on all saving throws against such ailments.

Once per round, when at least 30 feet in the air, a zuu can dive at an opponent for massive damage. This attack grants a +2 circumstance bonus to this Attack roll. If this attack hits, it deals double Bite damage and the target must make a Fortitude save (DC 14) or be stunned for 1 round.

3/day, a zuu can cause the wind to slice the air in front of it in a 30-ft.-cone. Creatures within the area of effect take 4d6 points of wind damage, a Reflex save (DC 14) for half damage. Blue mages may learn this ability as a 2nd level spell (Knowledge: Arcana DC 19).