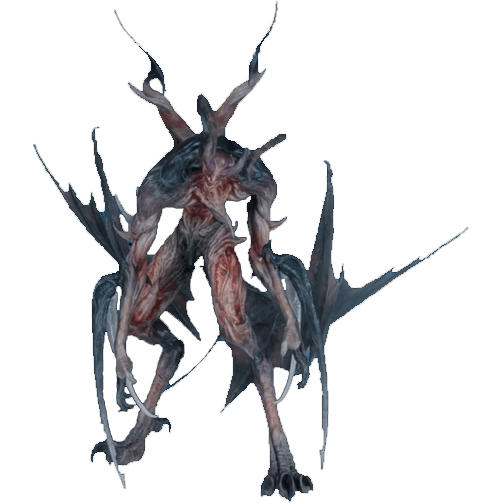 An unsightly demon that resembles an obsidian human with scythes that pierce its own hands. Both intelligent and persistent, the foras fades into the darkness to more effectively stalk its prey.

3/day, a foras forms a crimson claw draining the life force from their target with a melee touch attack (+9). If it hits, the target take 3d6 points of shadow damage and is healed for that much. The victim also takes 1 point of ability damage to a random stat (1d6): 1 for Strength, 2 for Dexterity, 3 for Constitution, 4 for Intelligence, 5 for Wisdom, or 6 for Charisma. Blue mages may learn this ability as a 3rd level spell (Knowledge: Local DC 21).

A foras can hold itself so still, it appears to be a statue. A foras that uses freeze can take 20 on its Stealth check to hide in plain sight as a stone statue.

Foras have improved claw damage by 2 sizes and have their critical bonus damage increase to x4.

A foras can start a grapple when it hits with both claw attacks, as though it had the grab ability. If it grapples a creature of size Medium or smaller, it squeezes each round for automatic claw damage with a successful grapple check. A foras can fly while holding a creature that weighs 350 pounds or less. It cannot throw creatures it is carrying, but can drop them as a free action.

1/day, the foras strikes fear in its opponents within a 30-ft. cone freezing them in time. Anyone caught in the cone-shaped effect must make a Will save (DC 20) or be inflicted with the Stop status effect for 3 rounds. This is considered a fear effect. Blue mages may learn this ability as a 9th level spell (Knowledge: Local DC 33).