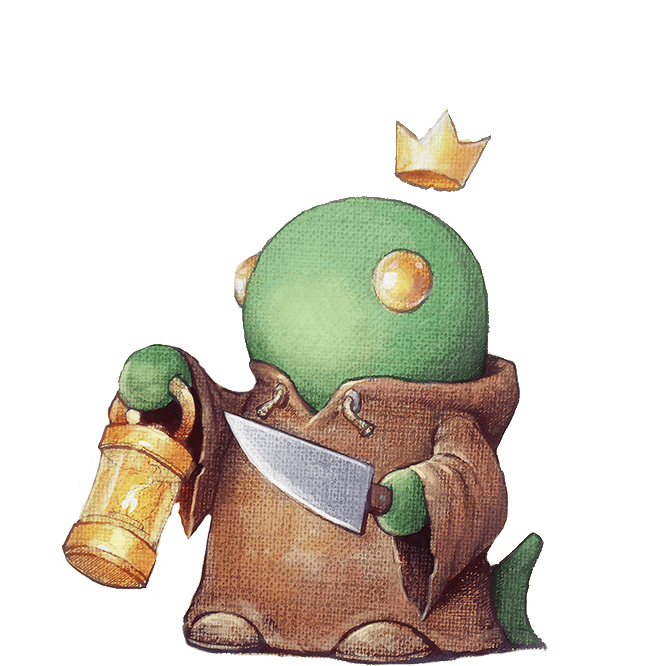 This tonberry wears a crown upon its head and karma comes to those who strike at him.

Once per round, a tonberry king may make a melee attack with its knife. If a creature is struck by it, it must make a Fortitude save (DC 23) or it is reduced to -1 hp, stabilized and unconscious. Those who are immune to critical hits are immune to this and take the knife damage only. The knife is only deadly in the hands of a tonberry king, who has finesse training with it.

5/day, as long as the tonberry king is not making a knife attack, it may use its Everyone’s Grudge ability on a single target within 60 ft. The target takes 14d8 points of shadow damage (Fortitude save DC 21 for half damage). Blue mages may learn this ability as a 6th level spell (Knowledge: Planes DC 27).

There is a 30% chance when a tonberry king takes damage from an attack action or spell made by a foe, it gains an additional use of Everyone’s Grudge that it may use as an immediate action against the character that damaged it. This extra use can only be made against its assailant and only on the round the tonberry king received damage. This ability does activate on damage suffered from sneak attacks and attacks of opportunity. This ability can be used a number of times per round equal to its Dexterity bonus and it also increases the damage by 1 each time it is used. It cannot use this ability on the same opponent twice per round.