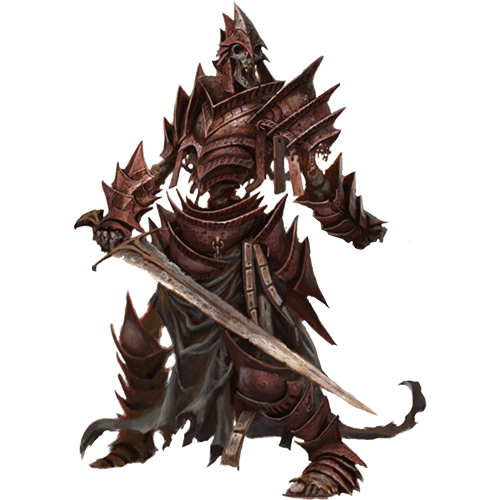 This armored creature looks like a red skeleton. Small red pinpoints of light burn in its hollowed eye sockets as it draws its weapon.

During Combat The blood bone tends to use Hell Slash on it’s melee opponents to reduce their strength while it uses marrow drain on spell casters. They will flank with their allies.

Once every 1d4+1 rounds, as a swift action, a blood bones can imbue its greatsword with dark energies. The next time the blood bones strikes a creature with its greatsword, it discharges the dark elemental energy. It deals an addition 1d6 points of shadow damage against the target of the attack. In addition, the target of this attack must make a Fortitude save (DC 13), or suffer 1d4 Strength loss. Blue mages may learn this ability as a 2nd level spell (Knowledge: Religion DC 19).

Once every 1d2+1 rounds, a blood bones can siphon magic points off a single target within 30 ft. The target must make a Fortitude save (DC 13) or be drained for 1d3+1 MP which heals the blood bones for the same amount in HP. This does not work on creature’s with no MP. Blue mages may learn this ability as a 1st level spell (Knowledge: Religion DC 17).