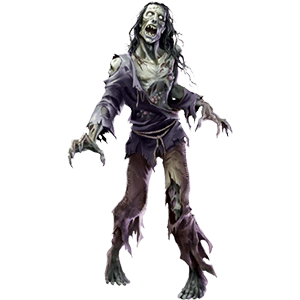 This walking corpse wears only a few soiled rags, its flesh rotting off its bones as it stumbles forward, arms outstretched.

During Combat The zombie usually picks the closest target unless ordered to pick another.

Once per day as a standard action, the zombie can inflict more pain than normal. If they succeed at hitting with their bite attack, the damage is 1d6+4 x 1.5 for total damage.

A zombie can breathe out a foul breath in a 15-ft.-cone. Creatures within the area of effect must make a Fortitude save (DC 11) or suffer a -2 penalty to Attack rolls and skill checks for 1d4 rounds. Blue mages may learn this ability as a 1st level spell (Knowledge: Religion DC 17).

Zombies have poor reflexes and can only perform a single move action or standard action each round (it has the staggered condition). A zombie can move up to its speed and attack in the same round as a charge action.