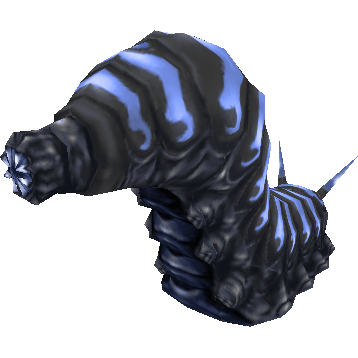 A huge, powerful, hundred-foot-long worm leaps out of the waves striking down ships out at sea. The worm’s thick, segmented hide ranges in color from blue to dark blue, providing natural camouflage.

A sea worm can roll over onto opponents as a standard action, using its whole body to crush them. Crush attacks are effective only against Medium or smaller opponents. A crush attack affects as many creatures as can fit under the sea worm’s body. Creatures in the affected area must succeed on a Reflex save (DC 27) or be pinned, automatically taking 10d4+18 points of bludgeoning damage during the next round unless the sea worm moves off them. If the sea worm chooses to maintain the pin, treat it as a normal grapple attack. Pinned opponents take damage from the crush each round if they don’t escape. The save DC is Constitution-based.

A sea worm can emit a 30-ft.-cone of watery breath. Creatures within the area of effect take 8d6 points of water damage and are inflicted with Silence status for 1d6 rounds. A successful Reflex save (DC 21) reduces the damage by half and negates the status effect. Blue mages may learn this ability as a 4th level spell (Knowledge: Arcana DC 23).