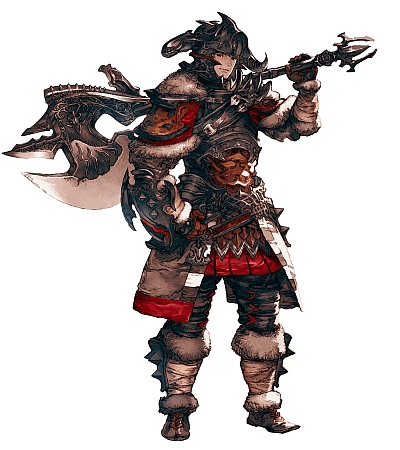 As long as wars are raged on distant lands, there will be men and women who fight those wars. The fighter is no mere sword-swinger; he is a skilled combatant, combining strength of arm, knowledge of weaponry, and practiced maneuvers to slice or bludgeon his foes into little red bits. Devoted to the perfection of a single group of weapons, the fighter’s meditations upon his favored weapon border on the obsessive, but none can deny his consummate skill.

Role: Fighters excel at combat—defeating their enemies, controlling the flow of battle, and surviving such sorties themselves. While their specific weapons and methods grant them a wide variety of tactics, few can match fighters for sheer battle prowess.

Starting Wealth: 5d6 x 10 gil (average 175 gil.) In addition, each character begins play with an outfit worth 10 gil or less.

All of the following are class features of the fighter.

A fighter is proficient with all simple and martial weapons and with all armor (light, medium, and heavy) and shields (except tower shields).

At 1st level, the fighter receives the Limit Breaks (Critical Strikes and Omnistrike).

Critical Strikes (Su): This Limit Break causes the fighter to focus on the weakspots and deadly parts of an enemy to deal the most damage. For a duration of 1 round + 1 round per four fighter levels after 1st, the fighter counts his first successful attack as a confirmed critical hit, every attack thereafter gains a +4 competence bonus on confirmation checks. This limit break requires only a swift action.

Omnistrike (Su): This Limit Break hones the fighter’s speed, increasing their number of attacks. For a duration of 1 round + 1 round per four fighter levels after 1st, during a full-attack with his chosen weapon, the fighter can make 1 additional attack at his highest BAB, another at -5 at 6th level, another at -10 at 11th level, and one last one at -15 at 16th level. These attacks are not doubled by any other effect but otherwise stack with haste and similar effects. This limit break requires only a swift action.

At 1st level, a fighter chooses one of the following weapon groups as his chosen weapons. He gains a +1 bonus on attack and damage rolls with his chosen weapon group. The bonus improves by +1 for every four levels beyond 1st. This feature does not count as Weapon Training, though you can take the Martial Focus feat to select one of these groups to count as Weapon Training.

Weapon groups are defined as follows (GMs may add other weapons to these groups, or add entirely new groups):

Natural: unarmed strike and all natural weapons, such as bite, claw, gore, tail, and wing.

At 6th level, a fighter can use this ability to gain the benefit of two combat feats at the same time. He may select one feat as a swift action or two feats as a move action. He may use one of these feats to meet a prerequisite of the second feat; doing so means that he cannot replace a feat currently fulfilling another’s prerequisite without also replacing those feats that require it. Each individual feat selected counts toward his daily uses of this ability.

At 10th level, a fighter can use this ability to gain the benefit of three combat feats at the same time. He may select one feat as a free action, two feats as a swift action, or three feats as a move action. He may use one of the feats to meet a prerequisite of the second and third feats, and use the second feat to meet a prerequisite of the third feat. Each individual feat selected counts toward his daily uses of this ability.

At 12th level, a fighter can use this ability to gain the benefit of one combat feat as an immediate action or three combat feats as a swift action. Each individual feat selected counts toward his daily uses of this ability.

At 20th level, a fighter can use this ability to gain the benefit of any number of combat feats as a swift action. Each feat selected counts toward his daily uses of this ability.

At 1st level, training and battle hone a fighter’s reactions, he gains a +1 bonus on Reflex saves. At 7th level and every six fighter levels thereafter, this bonus increases by 1 (to a maximum of +4 at 19th level).

As a fighter gains experience, he learns a number of talents that aid him and confound his foes. Starting at 2nd level, the fighter gains one fighter talent. He gains an additional fighter talent for every 2 levels of fighter attained after 2nd level. Unless specified otherwise, a fighter cannot select an individual talent more than once.

At 3rd level, when a fighter makes a single attack (with the attack action or a charge) with a weapon from his chosen weapon group, he adds double his Strength bonus on damage rolls instead. This ability doesn’t stack with any other ability that applies a different ability score (or ability score as a different type) to damage.

At 3rd level, the fighter gains a +1 morale bonus when repeating an attack roll, ability check, skill check, or saving throw he performed in the previous round. This bonus increases by +1 for every five fighter levels beyond 3rd. This bonus applies to the following rolls made in the current round, starting from the start of the fighter’s turn, if the fighter attempted the same type of roll in the previous round, as listed below:

This morale bonus also increases by an additional +1 for the first time it applies in the current round if the fighter failed the same attack roll, check, or saving throw in the previous round. The fighter can also apply his dogged obstinacy bonus to an activity that takes place over a longer period of time that requires checks or saves and involves the continually doing the same thing, even though the fighter may not be making rolls each round. These include Swim checks to swim for hours, Fortitude saves made against the effects of a forced march, and so on.

At 4th level, if the fighter takes ability damage, ability drain, or a temporary penalty to an ability score, this damage, drain, or penalty is reduced by 1 point. This reduction improves by 1 at 8th level and for every four fighter levels beyond that (to a maximum reduction of 5 at 20th level).

At 5th level, a fighter gains the lucky status effect for an attack roll, critical hit confirmation roll, miss chance check, or damage roll as an immediate action. The fighter can use this ability a number of times per day equal to 3 + his Constitution modifier.

At 5th level, a fighter adds his chosen weapon bonus on saves against any effect that target his held weapons.

At 8th level, a fighter defensively counters when an opponent uses an effect which would harm his held weapon or cause him to drop it. If the effect is a spell, spell-like ability, or supernatural ability which doesn’t grant the fighter or his weapon a saving throw, the fighter gains a Reflex save to negate the effect, calculating the DC as if the effect did allow a save. Otherwise, if the effect is an extraordinary or non-magical ability that doesn’t require the opponent to succeed at a check against the fighter’s CMD (such as the fencer’s precise strike ability) then the opponent must succeed at a combat maneuver check against the fighter as if attempting a disarm, steal, or sunder combat maneuver, as appropriate for the effect, or the effect is negated.

At 9th level, a fighter can combine a full attack with a single move. He must forgo an attack at his highest bonus but may take the remaining attacks at any point during his movement. In addition, a fighter that dual-wields or uses a double weapon also must forgo the first off-hand attack he can make. This movement provokes attacks of opportunity as normal.

At 10th level, as a swift action, a fighter can give a war cry to his allies, inspiring them to fight better. His allies (the fighter is unaffected) that can hear him gains a +2 competence bonus on attack rolls, +2 morale bonus on saving throws, and a +2 dodge bonus to AC. The effect lasts for 1 round per two fighter class levels. A fighter can use War Cry a number of times per day equal to 3 + his Constitution modifier.

At 11th level, once per round, a fighter can make a melee attack as an immediate action against an opponent who hits the fighter with a melee attack, so long as the attacking creature is within the fighter’s reach.

At 11th level, a fighter clings to his weaponry even when on the brink of death. A fighter can choose to retain his hold on his wielded weapons when he is knocked unconscious or succumbs to a sleep effect. While the fighter is asleep or unconscious, attackers must succeed at combat maneuver checks to disarm him, but they gain relevant bonuses for attacking a helpless target, including treating the fighter’s Dexterity as 0 when determining his CMD.

At 12th level, and every two levels thereafter, a fighter can choose one of the following fighter advanced talents in place of a fighter talent.

At 13th level, as a standard action, a fighter can make a single melee attack with a weapon from his chosen weapon group. If the attack hits, he may make a bull rush or trip combat maneuver against the target of his attack as a free action that does not provoke an attack of opportunity.

At 13th level, a fighter’s preferred weapons become almost an extension of his body. A fighter is immune to steal and sunder combat maneuvers made against a weapon he is wielding, provided the fighter has Weapon Focus with the weapon or the weapon belongs to weapon group which he possesses. A helpless fighter does not gain the benefits of this ability.

At 15th level, a fighter can take a standard action to make one attack with a weapon from his chosen weapon group as a touch attack that ignores damage reduction (or hardness, if attacking an object).

At 15th level, a fighter can take 10 on skill checks during combat even if the situation or immediate danger wouldn’t normally allow him to do so, provided the skill is a class skill, he is trained in the skill, and he could take 10 on the check outside of combat. The fighter cannot use this ability if he currently has any of the following conditions: confused, cowering, dazed, disabled, exhausted, fascinated, fatigued, flat-footed, frightened, helpless, nauseated, panicked, paralyzed, shaken, sickened, staggered, or stunned.

At 17th level, as a standard action, a fighter may make a single melee attack with a weapon from his chosen weapon group at a –5 penalty. If the attack hits, it is treated as a critical hit and deals double damage.

At 17th level a fighter doesn’t automatically miss an attack roll when he rolls a natural 1.

At 19th level, once per round before making an attack roll, a fighter can choose to treat the d20 result as a 10.

At 19th level, once per day, a fighter can spend a full-round action to make a full attack with double his normal number of attacks. He must declare his opponent beforehand and cannot switch targets while he executes his Doublestrike ability. Doublestrike doesn’t double extra attacks gain through haste or any other similar effects that grants additional attacks nor does it stack with any other class feature that doubles a number of attacks.