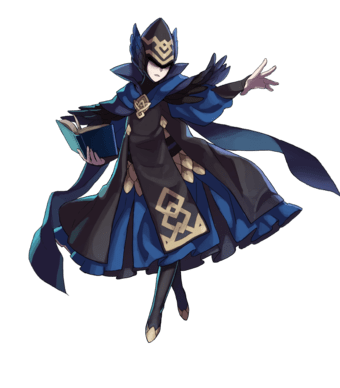 Where other spellswords imbue their weapons with destructive magic or magically enhance their own combat capabilities, others prefer to lay the enemy low with debilitating spells before taking them to task with magically-empowered weapons. An eclectic blend of frontline fighter and offensive support, the Azure Magister controls the battlefield from the thickest of it, freely swapping between melee and spellcasting to confound and thwart his enemies while supporting his allies.

All of the following are class features of the azure magister prestige class.

At each level except 1st and 10th, an azure magister gains MP per day and spells known as if he had also gained a level in a spell-casting class to which he belonged before adding the prestige class level and an increased effective level of spellcasting. He does not, however, gain any other benefit a character of this class would have gained. If he had more than one spell-casting class before becoming an azure magister, he must decide to which class to add each level for the purpose of determining MP per day and spells known.

At 1st level, an azure magister counts half his azure magister levels (minimum 1) as his fighter level for the purpose of qualifying for feats. If he has levels in fighter, these levels stack.

At 2nd level, whenever an azure magister makes a melee attack, until the end of his next turn, he does not provoke an attack of opportunity when casting a 1st level blue magic spell that deals no damage. This takes effect regardless of whether the attack succeeds, but does not stack when making multiple attacks. At 4th level and every two azure magister levels thereafter, this ability extends to the next spell level of enhancing and enfeebling spells, to a maximum of 5th level spells at 10th level.

At 3rd, 6th, and 9th level, an azure magister increases his power with his spells. At each such opportunity, he can choose from the list of the following (with a maximum of 2 per):

At 4th level, an azure magister gains Improved Power Weapons Wielder as a bonus feat without needing to meet its prerequisites.

At 5th level, whenever an azure magister casts a blue magic spell, he gains a morale bonus equal to the MP spent on that spell on his next attack roll against any of that spell’s targets. This bonus does not stack, and expires at the end of the azure magister’s next turn.

At 7th level, when an azure magister casts a blue magic spell and any number of targets fail any of their saving throws against it, he can expend an attack of opportunity to use his analysis ability as a swift action. This ability can be used a number of times per day equal to 3 + his Intelligence modifier.

At 7th level, an azure magister gains Advanced Power Weapons Wielder as a bonus feat without needing to meet its prerequisites.

At 9th level, an azure magister gains a +2 bonus to critical threat range with melee power weapons, which is applied after all other feats and class features that modify this range.

At 10th level, when an azure magister uses Advantageous Opportunity, he may use 2 different Analysis abilities as a swift action.

At 10th level, as a standard action, an azure magister may make a single attack with a melee power weapon against a creature. This attack deals an additional 10d6 points of damage. This extra damage is not multiplied on a critical hit.