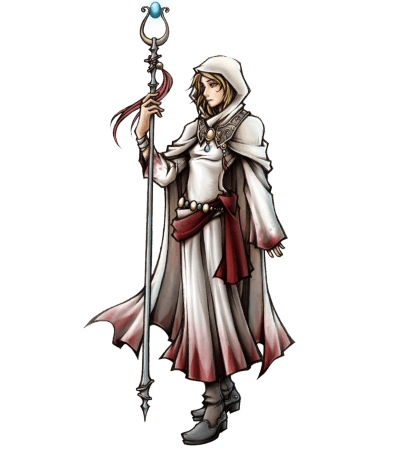 Masters of the healing art, Opal Magisters are highly sought after for their knowledge of white magic.

Requirements
To qualify to become an opal magister, a character must fulfill all the following criteria.
Feats: Any 3 metamagic feats.
Spells: Able to cast 7th-level white mage spells.

All of the following are class features of the opal magister prestige class.

Opal Magisters gain no proficiency with any weapon or armor.

At each level except 1st, an opal magister gains MP per day and spells known as if he had also gained a level in a spell-casting class to which he belonged before adding the prestige class level and an increased effective level of spellcasting. He does not, however, gain any other benefit a character of this class would have gained. If he had more than one spell-casting class before becoming an opal magister, he must decide to which class to add each level for the purpose of determining MP per day and spells known.

Holy Light (Su): This Limit Break brings into being a burst of holy radiance that heals all allies within 60 feet of the caster for 10d6 points of damage plus additional 2d6 per opal magister level. In addition, it cures all status effects without needing caster level checks. Every evil creature in the burst takes the same amount in holy damage, a Fortitude save (DC 15 + opal magister’s level + his Wisdom modifier) for half damage.

At 1st level, any light spells that the opal magister casts grants himself the ability to see normally in any conditions of illumination (shadowy illumination, darkness, and magical shadow or darkness). It also temporary removes the Blind status effect until the duration wears off. The range of this vision is 10 feet per level of the light spell cast, and the effect lasts for 1 round. As a secondary benefit, the opal magister gains a +1 competence bonus to his caster level when casting light spells.

At 2nd and 4th level, an opal magister increases his power with his spells. At each such opportunity, he can choose from the list of the following (with a maximum of 2 per):