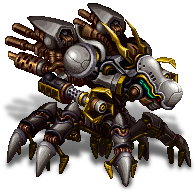 A weapon developed by a long-lost civilization that has run out of control and hunts down humans with lethal precision. It is posited that these machines were originally configured to target only hostile enemies, and that a malfunction has led to their erratic current behavior. While few remain intact, they display incredible durability and destructive power, and adventurers that encounter one are encouraged to see that it is put out of commission… permanently.

During Combat The io will start by using Rockets if really far away from it’s targets or Chain Guns if semi-far away. It will keep using Chain Guns until its foes get within 40 feet. If there is a group of foes within range, it will use Suppressing Fire. Sometimes it will use Booster Jets to get an advantage for shooting off more Rockets at it’s foes.

As a swift action up to 10 times per hour, an io can gain a fly speed of 60 feet (poor maneuverability) for a duration of 1 minute.

These advanced firearms have a range increment of 200 feet, automatically reload as a free action, and never misfire. An io’s core can process scrap metal into new ammunition, effectively giving io infinite ammo with these weapons. Integrated ranged weapons do not provoke attacks of opportunity when fired in melee combat.

When taking a full attack action, an io can attack with melee and ranged integrated weapons simultaneously.

Once every 1d2 rounds and as a standard action, an io can fire a rocket to a range of 800 feet. A rocket explodes on impact in a 30- foot-radius burst, dealing 6d6 points of fire damage and 6d6 points of bludgeoning damage to all creatures in the area (Reflex DC 21 halves). An io carries a maximum of five rockets. Its core can replenish fired rockets at the rate of one per 6 hours, crafting new rockets from scrap metal and other collected components used in the construction process. The save DC is Intelligence-based.

As a standard action, an io can use its chain guns to fire in a 100-foot cone. When it does so, it makes a single chain gun attack against every target in this area.

Io can see invisible creatures and objects as if they were visible.