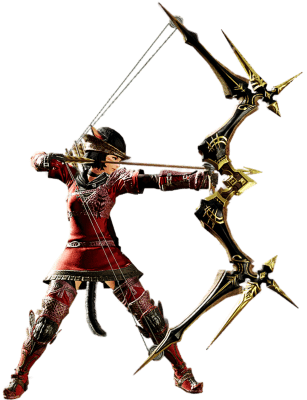 A bandit king raids caravans on the road. An ogre pillages farms to the north. A mage has kidnapped the mayor’s son and hidden him somewhere in the marsh—and the soldiers of the king cannot seem to stem the tide. The terrified citizens have only one choice, and it isn’t cheap. They call in a clan hunter. A clan hunter tracks down creatures and either eliminates them or brings them to whatever justice awaits them.

Requirements
To qualify to become a clan hunter, a character must fulfill all the following criteria.
Base Attack Bonus: +4.
Skills: Diplomacy 2 ranks, Stealth 4 ranks, Survival 4 ranks.
Special: Must have joined one of the Clan Hunter guilds, or Monster Hunting associations.

All of the following are class features of the clan hunter prestige class.

Vital Strike (Su): This Limit Break allows the clan hunter to see the vital point in a creature’s body and capitalizes on it with a powerful blow. Against an unmarked creature, the clan hunter makes a single attack, if it hits, the attack becomes a confirmed critical hit (even against creatures that are normally immune to critical hits) and deals maximum damage. Against a marked creature, the critical multiplier increases by 1.

A clan hunter can target, or mark, an individual humanoid or monstrous humanoid foe to better hunt that enemy. To do so, the clan hunter must focus on a foe that is present and visible, or on the depiction or description of the creature, for 10 minutes. Any interruption ruins the attempt and forces the clan hunter to start the process again. Once this study is complete, that target is called a mark. A clan hunter adds his clan hunter level as an insight bonus on all Diplomacy, Perception, and Survival checks made to determine the whereabouts of a mark. As a clan hunter gains levels, he gains additional abilities against a mark. If a clan hunter chooses a new mark before finishing with an existing one, the latter becomes unmarked, and the clan hunter loses experience points equal to the amount he would have earned for defeating that creature. A clan hunter can choose a mark only once a week.

At 1st level, a clan hunter adds his clan hunter level to Survival skill checks made to follow or identify tracks.

At 1st level, a clan hunter’s most well-known ability is tracking creatures: detecting them, locating them, identifying them, and observing important details about them. These abilities come with the limitation that the clan hunter must concentrate his attention on the target in order to do these things properly. So, the clan hunter learns to focus his concentration and attention on one creature: his quarry.

If the clan hunter meets a creature, he can study it so that he makes it his quarry immediately. A clan hunter can make any creature his quarry if he can see them (or sense in a unique way, such as by using a form of blindsense) as a move action.

Finally, a clan hunter can also make a creature his quarry based on evidence of their presence, without even knowing exactly who they are. If a clan hunter makes a successful Survival or Perception skill check to find tracks or other signs of a creature’s passage, he may make that creature his quarry as a standard action. If the clan hunter fails, he may not try to quarry that creature again for 24 hours, unless he discovers tracks or other signs of passage at a different, unrelated location.

A clan hunter has several special abilities that relate to his quarry:

A quarry lasts until the clan hunter chooses a different quarry. For the purpose of this ability, a troop or swarm is considered a single creature.

Starting at 2nd level, a clan hunter may move through any sort of undergrowth (such as natural thorns, briars, overgrown areas, and similar terrain) at his normal speed and without taking damage or suffering any other impairment.

As a clan hunter becomes more skilled at hunting, he learns to make creatures his quarry with greater efficiency.

Starting at 3rd level, a clan hunter leaves no trail in natural surroundings and cannot be tracked. He may choose to leave a trail if so desired.

At 3rd level and above, a clan hunter tracking a mark gains a +4 bonus on Constitution checks made to resist nonlethal damage from a forced march. In addition, a clan hunter tracking a mark can increase his own speed by 10 feet, up to a maximum value equal to the mark’s speed. This bonus stacks with all other speed increases. At 6th level, the speed increase improves to 20 feet and it goes up to 30 feet at 9th level.

Hobbling Attack (Ex): The clan hunter can use this talent as a free action when he hits with an attack. The target of the attack’s land speed is reduced by 1/2 for 1d4 rounds. At 6th level, this penalty to movement speed is reduced by 3/4ths for 1d4 rounds, and at 9th level, this penalty reduces all movement speed, effectively immobilizing the target.

Predation (Ex): When a clan hunter attacks his quarry, his increased focus makes him even deadlier. The clan hunter gains a +1 insight bonus to attack rolls against his quarry, and deals an additional 1d6 precision damage against them on all attacks. These bonuses increase by +1 and +1d6 respectively at 6th and 9th level. This extra damage is not multiplied upon a critical hit. If the clan hunter has the predation ability from a class feature, the levels in clan hunter stacks.

Swift Mark (Ex): The time required to mark a target is reduced to 5 minutes. At 6th level, this becomes 1 minute, and at 9th level, a full round action.

Trick Shots (Ex): A clan hunter can choose one of the following combat maneuvers or actions: disarm, feint, bull rush, grapple, trip or sunder. He can perform this action with a bow against any target within 30 feet, with a –4 penalty to his CMB. At 6th level, and 9th level, he may choose an additional trick shot to learn. These maneuvers use up arrows as normal. A target grappled by an arrow can break free by destroying the clan hunter’s arrow (hardness 5, hit points 1, break DC 13) or with an Escape Artist or CMB check (against the clan hunter’s CMD –4).

At 4th level, a clan hunter’s senses grow sharper than even the most observant. The clan hunter adds his clan hunter level on any Perception checks. This will also stack with the bonuses provided by the Mark ability.

Beginning at 4th level, a clan hunter adds his Constitution bonus (if any) to Will saves made to resist the special attacks or spells of his mark.

Also at 5th level, a clan hunter can track a creature moving under the influence of trackless step or a similar effect, though he takes a -20 penalty on his Survival checks when doing so.

At 8th level, a clan hunter gains the scent ability. This ability allows the clan hunter to detect approaching enemies, sniff out hidden foes, and track by sense of smell. A clan hunter can identify familiar odors just as humes do familiar sights.

The clan hunter can detect opponents within 30 feet by sense of smell. If the opponent is upwind, the range increases to 60 feet; if downwind, it drops to 15 feet. Strong scents, such as smoke or rotting garbage, can be detected at twice the ranges noted above.

After achieving 8th level, the clan hunter can notice the tiny movements of his mark along with other visual and auditory ones that allow him to react more quickly in combat. This grants him a +4 competence bonus on all initiative checks (stacks with Improved Initiative). In addition, the clan hunter may select one mark each round, if there are more than one mark in the same area; that marked creature may not make attacks of opportunity against or flank the clan hunter during that round.

A clan hunter of 9th level reaches the top of the food chain. Whenever he attacks his quarry and misses with a roll that is not a natural 1, he hits his quarry, but the damage is halved.

At 10th level, a clan hunter’s vision becomes adjusted to see without a light source, out to a range of 60 feet. If he already has darkvision from another source (such as his race), his darkvision improves, extending out to 90 feet.

Once per day, a clan hunter of 10th level can find the shortest, most direct physical route to a specified destination, be it the way into or out of a locale. The locale can be outdoors or underground. This works with respect to locations, not objects or creatures at a locale. This ability enables the clan hunter to sense the correct direction that will eventually lead him to his destination, indicating at appropriate times the exact path to follow or physical actions to take. This ability lasts for an entire day or until the clan hunter rests, whichever comes first.