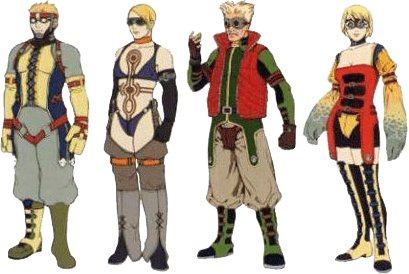 Al Bhed differs only slightly from humes; in their bright green eyes with spiral-patterned irises. As a result, they often wear goggles. Another mark of the Al Bhed is that most of them have blond hair. The Al Bhed pride themselves on the usage of their specialized knowledge of ancient technology which they call “Machina”. The Al Bhed are a people that have finally come into their own. Formerly branded dangerous heretics and shunned for their use of ancient technology, they are now heralded as the people who will bring Spira into a new golden age, with the technology cast off centuries ago. As to be expected, the Al Bhed are skilled with technology, and are also skilled seamen and miners, willing to do almost anything to get their hands on ‘new’ technology.

The following feats are available to an al bhed character who meets the prerequisites.

The following racial archetypes are available to al bheds: