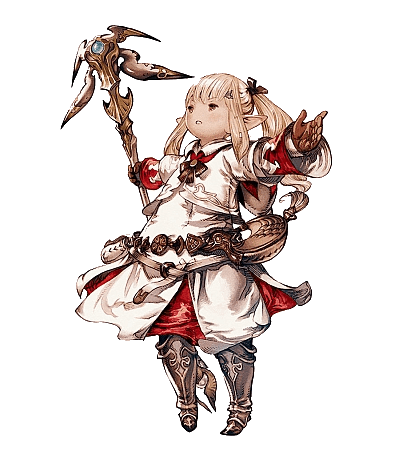 Gaia for all her beauty is a complex and complicated place. The world while filled with beautiful and wondrous landscapes is still fraught with disaster. Conflict, and war are only one of these disasters, casting a shadow of misery and pain in their wake. It is in this darkness that those who follow the teachings of the white mage shine brightest. While some seek to hurt and maim, the white mage chooses a life of compassion only seeking to harm when absolutely necessary. The white mage finds purpose in protecting their allies, often by empowering their abilities and enhancing attributes to a height previously unattainable. When all this preparation and protection isn’t enough the white mage is there with their gentle healing embrace, mending the wounds of their comrades.

Role: White mages provide excellent support, from keeping their allies up and ready with healing spells, such as cure and regen, keeping their defenses sharp with spells such as shell and protect, negating various status effects with esuna and dispel, and even flagging down bonuses foes get with deprotect and deshell. Additionally, white mages can serve as deadly, if one-note damage dealers, capable of blasting down foes with spells like light and holy. White mages can come incredibly in handy against the undead as well, as undead typically take damage from healing spells.

Starting Wealth: 2d6 × 10 gil (average 70 gil.) In addition, each character begins play with an outfit worth 10 gil or less.

All of the following are class features of the white mage.

White Mages are proficient with the club, sling, power rod, power staff, and quarterstaff, but not with any type of armor or shield. Heavier armor interferes with a white mage’s movements, which can cause her spells with somatic components to fail.

At 1st level, the white mage receives the Limit Breaks (Breath of the Earth and Pulse of Life).

To learn or cast a spell, the white mage must have a Wisdom score equal to at least 10 + the spell level (Wis 11 for 1st-level spells, Wis 12 for 2nd-level spells, and so forth). The Difficulty Class for a saving throw against a white mage’s spell is 10 + the spell level + the white mage’s Wisdom modifier. In addition, a white mage gains additional MP for having a high attribute (Wisdom—see Table: Bonus MP per Day (by Spell Level) on the MP System page).

At 1st level and every four white mage levels thereafter, a white mage increases her power with her spells of 1st level or higher. This ability applies only to spells that she casts as a white mage, not to those she might have by virtue of levels in another class. At each such opportunity, she can choose from the list of the following (with a maximum of 2 per):

White mages learn a number of cantrips, or 0-level spells. These spells are cast like any other spell, but they do not consume MP and may be used again. White mages begin with 4 0-level spells and gain an additional 0-level spell every three levels after 1st level.

As a white mage gains experience, she learns a number of talents that assist her in manipulating spells and other forms of magic. At 2nd level, and every two levels thereafter, a white mage gains one mage talent. A white mage cannot select an individual talent more than once. Talents marked with an asterisk add effects to a white mage’s spellcasting ability. Only one of these talents can be applied to an individual spell and the decision must be made before the spell is cast.

At 3rd level, any white magic spells that the white mage casts that cures status effects provides a bonus to saving throws against that status effect equal to the spell level of the spell for 1 round.

Beginning at 3rd level, a white mage may roll twice on any concentration check and take the higher result.

Beginning at 4th level, a white mage can increase the potency of her next healing spell as a swift action, so long as the casting time of the spell is 1 standard action or less. The next healing spell the white mage casts heals for half again as many hit points. She can use this ability once per day and every four levels thereafter, she gains an additional use. The use of this ability cannot be used with metamagic feats.

At 5th level, a white mage can regain her MP quicker. The white mage must be relaxed and must be free from overt distractions, such as combat raging nearby or other loud noises. For example, she could be riding in the back of a carriage and benefit from this ability. The white mage does not gain this recovery if she is asleep or unconscious. The white mage regains 1 MP per hour. This increases by 1 for every five white mage levels after 5th.

A white mage is a master at manipulating magical forces. At 5th level, as a move action, she reduces the cost of any metamagic feat known by one MP less than standard. For example, a 5th level white mage casts a spell with the Empower feat for 1 extra MP cost higher than the original spell. The metamagic enhancement can only be applied to one enhancement per spell. This ability does not affect the Heighten Spell feat. At 11th level and 17th level, the adjusted MP cost is reduced one additional MP. The adjusted enhancement can never reduce the base spell below its original level. A white mage may use this ability up to 3 times per day.

As the white mage’s mastery of magic grows deeper, she learns to cast a small number of spells without spending magic points. Beginning at 6th level, a white mage may select one 1st-level white magic spell she knows and is able to cast. She may now cast this spell once per day as a spell-like ability without needing to spend MP. The caster level for this spell is equal to the white mage’s caster level. At 9th level and every three levels thereafter (12th, 15th, and 18th level), the white mage may select an additional spell which she can cast once per day as a spell-like ability. The maximum spell level which can be chosen at each of these intervals is indicated on figure “Table: Innate Spells.”

At 10th level, a white mage can cast two spells using one standard action. Both of the spells must have the same standard action casting time. The white mage can make any decisions concerning the spells independently of each other. Any target affected by both of the spells takes a –4 penalty on saves made against each spell. A white mage receives a +4 bonus on caster level checks made to overcome spell resistance with these two spells. The white mage may use this ability once per day at 10th level and one additional time per day at 15th and 20th level.

At 11th level, when a white mage uses Divine Seal, her next healing spell not only heals for double, but also removes 1 negative status effect chosen by the white mage. The use of this ability cannot be used with metamagic feats.

At 12th, and every two levels thereafter, a white mage learns further talents to assist her in manipulating spells and other forms of magic. She may choose one of the following advanced mage talents in place of a mage talent. Talents marked with an asterisk add effects to a white mage’s spellcasting ability. Only one of these talents can be applied to an individual spell and the decision must be made before the spell is cast.

At 13th level, the white mage may select up to one target per point of Wisdom bonus to exclude from any area-of-effect spell cast, or double the number of targets affected by a spell. In the first application, the targets are engulfed in the effect, but do not suffer any of the effects. This is a target-based exclusion; other opponents sharing the excluded target’s space are still affected by the spell. In the second case, when a spell description specifies an effect of “one creature per level,” the white mage may instead affect up to two creatures per level.

At 15th level, the white mage may apply any single metamagic feat that she knows to a 6th-level spell or lower that she is about to cast. This does not alter the level of the spell or the MP cost. The white mage can apply a metamagic feat in this way a number of times per day equal to her Wisdom modifier.

At 17th level, the white mage’s command of magic is such that she may unravel a creature’s natural resistance to magic. A white mage may reduce a target’s spell resistance by her white mage level, once per day per target. In addition, a white mage ignores energy resistance equal to half her caster level.

At 18th level, three times per day, as a free action, a white mage can reduce the cost of her next spell to 1 MP. This MP reduction is applied after any metamagic cost increases. Additional metamagic cannot be applied after this cost reduction.

At 19th level, a white mage can alter areas of effect for spells that use one of the following shapes: burst, cone, cylinder, emanation, or spread. The alteration consists of creating spaces within the spell’s area or effect that are not subject to the spell. The minimum dimension for these spaces is a 5 ft. cube. Furthermore, any shapeable spells have a minimum dimension of 5 ft. instead of 10 ft. She can use this ability a number of times per day equal to 3 + her Wisdom modifier.

At 20th level, a white mage becomes the pinnacle of white magic. The white mage gains the following abilities: