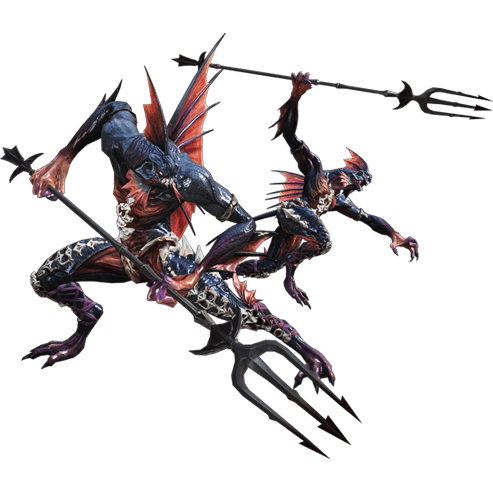 These amphibious beastmen reside mainly on the western coastline of the island of Elshimo. They spend the majority of their time practicing primitive fishing techniques to provide an ample supply of shellfish for their survival. Other than to protect their territory, the sahagins rarely interact with other races. Before the Great War, they adamantly refused invitations by the Shadow Lord to join the beastmen armies–until he convinced them that the steamships of Bastok would eventually destroy their environment. During the war, the sahagins used their sea maneuvering abilities to attack even the strongest ships in the allied fleet, and were feared by all seafaring soldiers. After the flames of battle had been extinguished, the sahagins cut off all ties to the other beastmen and returned to their secluded way of life. Apart from limited trading with Norg–they often trade shellfish for metal trinkets salvaged by the pirates–the sahagins have little contact with the outside world. Finally, many of the sahagins worship the elements, and have made deities out of sea serpents and oddly shaped stones within their grotto.

The following feats are available to a sahagin character who meets the prerequisites.

The following racial archetypes are available to sahagins: