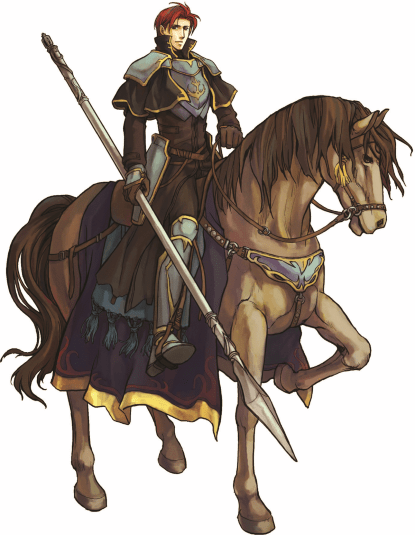 An elite lancer is a mounted combat specialist par excellence. He is skilled in the arts of formal jousting, with all its pomp and ceremony and its intricate courtly rules of etiquette, but he is no less talented on the battlefield when the time comes to ride down his enemies and drive them into the dust on the point of his lance. Elite lancers are found in virtually every culture, and in many are accorded great esteem for their noble bearing and for their puissance in contests of arms. Their fame often precedes them, but some work to keep a low profile and let their steel and their steed do the talking.

Requirements
To qualify to become an elite lancer, a character must fulfill all the following criteria.
Base Attack Bonus: +5
Feats: Mounted Combat, Weapon Focus (lance)
Skills: Handle Animal 5 ranks, Ride 5 ranks
Proficiency: Must be proficient with lances and light and heavy shields.

All of the following are class features of the elite lancer prestige class.

At 1st level, an elite lancer gains Unseat as a bonus feat.

At 2nd level and each level thereafter, an elite lancer learns a wide variety of tricks for using his lance to mow down his opponents, especially when facing off against other mounted elite lancers in a formal joust. Unless otherwise noted, he can take each jousting trick only once.

Charge Breaker (Ex): When the elite lancer is wielding a weapon with the brace property, he can ready it against a charge as an immediate action. In addition, if he is wielding a light or heavy shield and is attacked by a creature using the charge action, he can make a shield bash attack against his attacker as an attack of opportunity or as an immediate action. This attack is resolved before the charging creature’s attack. If the elite lancer does not threaten his attacker, he can still make this attack against the creature (if it attacks him with a natural weapon) or as a sunder combat maneuver targeting the attacker’s weapon (if it attacks him with a manufactured weapon). If the attack hits or the sunder maneuver succeeds (regardless of the damage dealt), the charging creature’s attack is partly deflected and it takes a penalty equal to the elite lancer’s level on any attack and damage rolls it makes against the elite lancer as part of its charge action.

Combined Charger (Ex): When the elite lancer uses the charge action while mounted and his mount does not attack, he can combine the creature’s power and momentum with his own. He adds his mount’s size modifier to all combat maneuver checks he makes when mounted. He also adds an additional bonus on combat maneuver checks equal to his elite lancer level or the mount’s Strength modifier, whichever is less, and he adds the same bonus to any hit point damage dealt by a successful attack made as part of a mounted charge.

Crooked Courser (Ex): When the elite lancer uses the charge action while mounted, or when his mount uses the run action, his mount can turn up to 90 degrees during its movement. This can be a single 90-degree turn or two 45-degree turns.

Expert Trainer (Ex): The elite lancer learns to train mounts with speed and unsurpassed expertise. The elite lancer gains a bonus equal to his class level whenever he uses Handle Animal on an animal that serves as a mount. In addition, he can reduce the time needed to teach a mount a new trick or train a mount for a general purpose to 1 day per 1 week required by increasing the DC by +5. He can also train more than one mount at once, although each mount after the first adds +2 to the DC.

Lancer’s Charge (Ex): The elite lancer no longer takes a penalty to his AC when using the charge action, and he increases his attack roll bonus when charging to +4.

Mounted Combat Master (Ex): The elite lancer may select any one of the following as a bonus feat: Animal Affinity, Signature Skill (Ride), Skill Focus (Ride), or any feat for which the Mounted Combat feat or ranks in the Ride skill is a prerequisite. He may take this jousting trick more than once, and he must meet all prerequisites for the feat in question.

Nimble Charger (Ex): When the elite lancer uses the charge action while mounted, he can charge even if his mount must move through difficult terrain or squares occupied by friendly creatures.

Performance Combat (Ex): The elite lancer’s style is flamboyant and flashy, ideally suited for playing to the crowd and currying the favor of onlookers. He treats the lance as if it had the performance weapon quality, gaining a +2 bonus on combat performance checks prompted by an attack or combat maneuver with the lance. In addition, he gains one performance combat feat as a bonus feat. He may take this jousting trick more than once, gaining a different bonus feat and increasing the bonus he gains on combat performance checks with a lance by 1 each time.

Shield Mount (Ex): When the elite lancer is mounted upon his special mount and wielding a shield, his mount also adds his shield bonus (including any enhancement bonus) to its AC. This AC bonus does not apply if the elite lancer is unaware of the attack or is denied his Dexterity bonus to AC.

Trip Mount (Ex): Although a violation of traditional jousting etiquette in formal matches, elite lancers are nonetheless skilled in the art of tripping up the mounts of their enemies, a tactic which is fair game against the ignoble and villainous. Whenever he attempts a combat maneuver check to trip a creature carrying a rider, he adds his elite lancer level to his CMB for the purpose of the roll. If the mount is tripped, he adds twice his elite lancer level to the DC of any Ride check made by that creature’s rider to avoid damage or falling prone after its mount is tripped. If the elite lancer exceeds the DC to trip the target mount by 5 or more, he may choose to injure the mount’s legs as well, reducing its speed by half as if it had stepped on caltrops.

Weaving Point (Ex): When using the charge action, the elite lancer can catch his foe off-guard with a sudden shift in the point and angle of his lance. Treat this as a Bluff check to feint, but it is a free action made as part of the charge, and the elite lancer may use his bonus on Intimidate rather than Bluff for the purpose of this feint. If the elite lancer exceeds the DC of the Bluff check by 5 or more, the target is denied its shield bonus to AC as well as its Dexterity bonus to AC.

At 5th level, an elite lancer learns to make devastating charge attacks while mounted. Double the threat range of any weapons wielded during a charge while mounted. This increase does not stack with other effects that increase the threat range of the weapon. In addition, the elite lancer can make a free bull rush, disarm, sunder, or trip combat maneuver if his charge attack is successful. This free combat maneuver does not provoke an attack of opportunity.