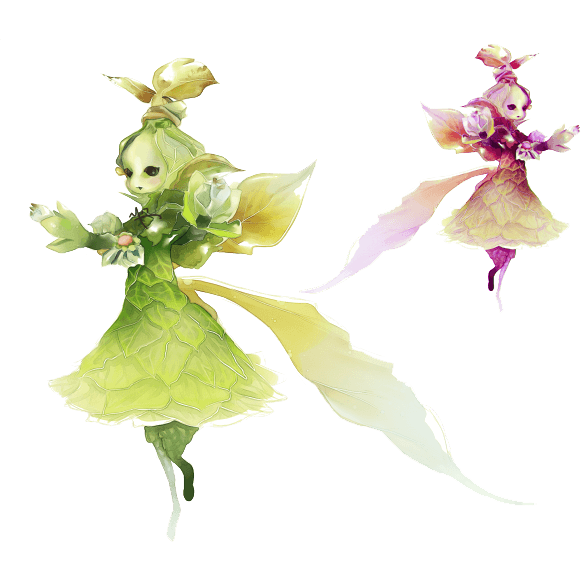 A diminutive people who dwell deep within the Black Shroud, sylphs resemble delicate dolls wrapped in vibrant leaves. They aren’t adept to physical combat but rely on more magic, illusions and healing abilities to fend themselves from their enemies.

Sylphs, being numerous around the Eastern Black Shroud and having the best relationship with the city-states of all of them. They speak a broken form of the common language and never use terms such as “I” or “We”, opting for terms such as “The Woken Ones”, “The Metal Ones”, “The Seedy Ones”, etc.

They nest in Moonspore Grove, which is blocked off by boulders. The pathways to the Grove have many sylphs that can be engaged in combat, and their houses can be easily seen glowing from tree trunks. A ground structure called the Goldleaf Dais can also be found in this area.

Due to the invasion of the Garleans in the Twelveswood and the following Calamity, some sylphs resorted to summoning Ramuh, the lightning-aspected primal. These sylphs have been ‘touched’, changing to a purple hue, and are fiercely defensive of their territory, only venturing outside to bring back untouched sylphs (which remain a green hue) into their fold. The untouched sylphs have since fled to a village called Little Solace, with the support of Gridania.

Although all feminine in appearance, sylphs are a dual-gendered species whose names reflect their gender. All male Sylph’s names end in with “xio” while all female Sylph names end in “xia.”

Although many sylphs follow the general model of the standard sylph, many more do not. Those of different lineages may evince dramatically different manifestations of their heritage, both in appearance and in ability. Here are 3 different potential heritages for sylph PCs. If you choose to use a specific bloodline instead of the general rules for creating a sylph, you should work with your GM to ensure that your character’s appearance reflects that bloodline.

The following racial archetypes are available to sylphs: