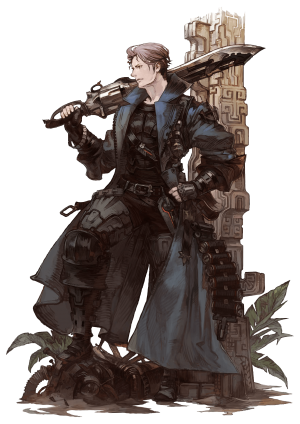 Fast, deadly and explosive. The gunbreaker is a warrior who jumps into the fray to protect his allies while utilizing the special gun arms, to break through enemy lines with their explosive blades or fire from range while protecting the back lines. Most gunbreakers are high ranking officers or guardians of an aristocratic, as the exotic and powerful nature of the gun arms is awed by many.

Role: Close melee combatants that can be helpful both in melee and at range by using a gun arm to do either or both of these, and using enhanced bullets to aid themselves and allies. They tend to be very aggressive on the battlefield and provide support where needed. Some are dedicated protectors, only deciding to use the full power of their gun arm when truly threatened.

All of the following are class features of the gunbreaker.

A gunbreaker is proficient with all simple weapons and all gun arms, and with all armor (light, medium, and heavy) and shields (except tower shields).

At 1st level, the gunbreaker receives the Limit Breaks (No Mercy and Superbolide).

Superbolide (Su): This Limit Break fires a potent defensive shell that erects a barrier around the gunbreaker, shielding them from attacks. Anytime the gunbreaker would take damage, their barrier is damaged instead. The barrier has a number of hit points equal to the gunbreaker’s level + 10, and has a hardness of 2. The hit points increase by 10 and the hardness increases by 2 per four gunbreaker levels after 1st, and the barrier persists for a duration of 1 round + 1 round per four gunbreaker levels after 1st, or until destroyed or the end of combat. This limit break requires only a swift action.

At 1st level, a gunbreaker begins play with a gun arm of his choice. His starting weapon’s firearm part is battered, receiving a -2 penalty on ranged attacks, and only he knows how to use it properly. All other creatures treat his gun arm as if it had the broken condition. If the weapon already has the broken condition, it does not work at all for anyone else trying to use it. This starting weapon can only be sold for scrap (it’s worth 4d10 gil when sold). The gunbreaker also gains Gunsmithing as a bonus feat.

When the gunbreaker loads his gun arm, the first set of rounds to be used are always infused first – meaning the rounds he spends first are the rounds that are infused. Infused rounds naturally deal an additional 1 point of damage, and are considered magic for the purpose of bypassing DR. At 3rd level and every two gunbreaker levels thereafter, this extra damage increases by 1. The gunbreaker may also use infused ammo to use the following abilities starting at 1st level:

Also at 1st level, as a swift action, the gunbreaker can directly infuse himself with aether, wreathing his body in a protective aurora. He gains fast healing 2 and a +1 deflection bonus to AC. These bonuses increase by 2/+1 at 4th level and every three gunbreaker levels thereafter. This ability lasts for a number of rounds equal to his Wisdom modifier, and can be used a number of times per day equal to his Wisdom modifier.

At 2nd level, the gunbreaker learns to blend offense with defense, treating his gun arm as both sword and shield. When wielding a gun arm, he gains a +1 shield bonus to AC. This bonus increases by 1 for every four gunbreaker levels after 2nd. This bonus stacks with other shield bonuses.

As the gunbreaker trains, he develops skills and techniques to take advantage of his unique style of combat. At 2nd level and every two gunbreaker levels thereafter, the gunbreaker gains a talent from the list below. He must meet the prerequisite of the talent selected; unless specified otherwise, each talent can only be selected once.

At 3rd level and every three gunbreaker levels thereafter, the gunbreaker’s skill at wielding gun arms allows him to learn, or develop, potent specialized techniques. These special techniques can only be used with a gun arm, and each technique is usable a number of times per day equal to 3 + his Wisdom modifier. Most require an expenditure of infused ammo to activate. The gunbreaker must meet the prerequisites to choose a gun arm technique, and must have enough magicked ammo to choose and use the technique.

The stoic, unflinching guise of an immovable guardian; this is the demeanor all gunbreakers aspire to achieve. At 3rd level, the gunbreaker adds his Wisdom modifier as a bonus to all Fortitude saving throws. This does not stack with any other ability that applies a modifier to Fortitude saves.

At 3rd level, when the gunbreaker confirms a critical hit with a melee attack with a gun arm, he infuses an amount of magicked ammo in his gun arm up to the maximum he can infuse with his magicked ammo ability.

At 4th level, the gunbreaker’s training allows him to more easily handle the burdens of heavier gear. Whenever he is wearing armor, he reduces the armor check penalty by 1 (to a minimum of 0) and increases the maximum Dexterity bonus allowed by his armor by 1. Every four levels thereafter (8th, 12th, 16th and 20th), these bonuses increase by +1 each time, to a maximum –5 reduction of the armor check penalty and a +5 increase of the maximum Dexterity bonus allowed. In addition, a gunbreaker can also move at his normal speed while wearing medium armor. At 8th level, a gunbreaker can move at his normal speed while wearing heavy armor.

At 5th level, the gunbreaker has gained enough training with gun arms to impose his own unique style into his fighting techniques. At 5th level and every five gunbreaker levels thereafter, he chooses one of the masteries below to apply to all gun arms he wields. He can choose a mastery multiple times, unless otherwise noted.

At 5th level, the gunbreaker’s merciless focus keeps his enemies on the backfoot, even while he pauses to prepare for his next assault. A gunbreaker reloading a gun arm no longer provokes an attack of opportunity while in an enemy’s threatened square.

At 7th level, the gunbreaker’s aurora ability can be used on an ally he can see within 15 feet. Only one instance of aurora from a given gunbreaker can be active at any one time; if another aurora is cast, even if on another target, the first instance ends. In addition, he can spend two uses of aurora to instead heal himself (or an ally within 15 feet) equal to four times the gunbreaker’s Wisdom modifier.

The restless, ever-mindful overwatch of a dedicated defender; this is the bearing all gunbreakers aspire to achieve. At 9th level, the gunbreaker applies his Wisdom modifier as a bonus to all Reflex saving throws. This does not stack with any other ability that applies a modifier to Reflex saves.

At 10th level, the gunbreaker’s skill allows him to seamlessly combine both simple and technical combat techniques. When making a full attack action, he can declare the use of continuation. This lowers his AC by 4, applies a -2 penalty to all attack rolls made that round, and at the end of the full attack, he also performs a single gun arm technique that requires a standard action (as part of the full attack action). This ability can be used a number of times per day equal to the gunbreaker’s Wisdom modifier.

At 11th level, the gunbreaker’s demeanor is impressive enough to fill his allies’ hearts with a measure of his own determination. His adjacent allies gain the effects of the Heart of Stone and Heart of Light abilities. At 15th level, the range increases to allies within 10 feet and at 20th level, all allies within 20 feet gain these effects. If the gunbreaker is unconscious, helpless, or otherwise unable to act, this bonus to allies is lost.

At 13th level, the gunbreaker can spend three uses of Aurora to apply it as an aura around an ally. When used this way on an ally within 30 feet, it coalesces into a 15-ft.-aura around the target, granting allies within the aura half of the fast healing and AC bonus (rounded down). Only one instance of this aura can be active at any given time. As with a standard aurora, a gunbreaker can only have one instance of this ability active at any given time.

At 14th level, the gunbreaker’s aim is unerringly drawn to his foe’s vital spots, as he seeks to finish fights with brutal efficiency. He increases his critical threat range with gun arms )but not the firearm portion of the gun arm) by 1. This applies after all other effects that increase critical threat range.

At 17th level, if the gunbreaker’s hit points are ever dropped below 0, he can expend 4 uses of aurora as an immediate action to instead set his HP to 0. This applies even if the damage would have otherwise killed him.

At 19th level, the gunbreaker’s gun arm cannot be disarmed or sundered while he is wielding it, and is no longer subject to misfires.

At 20th level, the gunbreaker’s mastery of gun arms peaks – a master of both his weapons and the energies that empower them. The DC of his gun arm techniques increases by 1, and all alternative uses of aurora consume 1 less daily use of aurora (minimum 1). In addition, he gains a bonus to confirm critical hits with his gun arm equal to his Wisdom modifier.