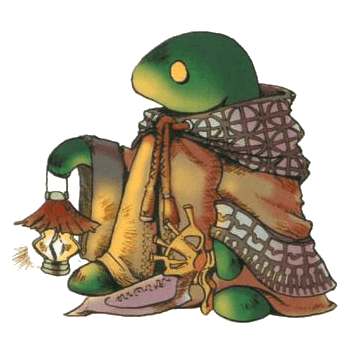 Tonkins are the offshoot race of their tonberry brethren. They are a (mostly) peaceful race, keeping to themselves. Tonkins are small, usually no taller than three feet. They have green skin, round heads with small snouts, yellow eyes and a fish tail. Its unsure what gender they are, as they all look the same. Although mute, they communicate through their limited telepathy.

Although many tonkins follow the general model of the tonkin, many more do not. Those of different lineages may evince dramatically different manifestations of their heritage, both in appearance and in ability. Here are 2 different potential heritages for tonkin PCs. If you choose to use a specific bloodline instead of the general rules for creating a tonkin, you should work with your GM to ensure that your character’s appearance reflects that bloodline.

The following feats are available to a tonkin character who meets the prerequisites.

The following racial archetypes are available to tonkins: