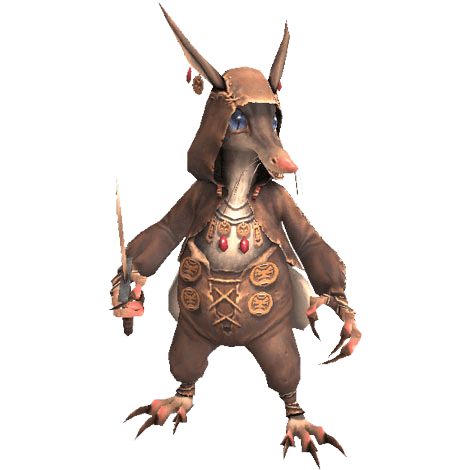 These diminutive beastmen reside together with the civilized races of Vana’diel. Most Qiqirns make their home in a city located in the heart of the Aht Urhgan Empire’s western half. They tend to have an easygoing and cheerful personality, but have difficulty speaking the common language due to their unusual vocal cords. Even so, it is not uncommon to hire a Qiqirn as a shop or guild assistant, thanks to their reliability and surprisingly quick wits. Some Qiqirn have even made use of their sharp sense of smell to become extremely wealthy in the production of fragrances. According to their oral tradition, the ancestors of the Qiqirns lived a nomadic life in the northern lands. Even today, remnants of the Qiqirn’s ancient lifestyle may be seen in their unique customs, such as their sheep-led wagon homes, their leather clothing, and their habit of carrying their valuables with them at all times.

Although many qiqirns follow the general model of the standard qiqirn, many more do not. Those of different lineages may evince dramatically different manifestations of their heritage, both in appearance and in ability. Here are 2 different potential heritages for qiqirn PCs. If you choose to use a specific bloodline instead of the general rules for creating a qiqirn, you should work with your GM to ensure that your character’s appearance reflects that bloodline.