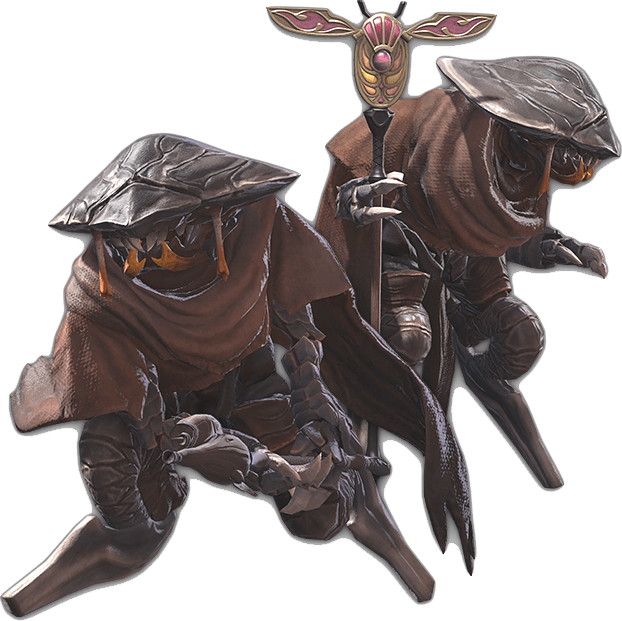 A tribe of insect-like beastmen known to inhabit the south region of the Dravanian Forelands. Having made remarkable advances in alchemy and metallurgy, these hunters have developed incense which deters Dravanian intruders, this preserving Gnath territory. They are also known as the Onemind as all Gnath are spiritually linked to their leader. Those whose link to this hive mind are broken become individual beings who are cast out form their own community as the Vath or Nonmind.

Though bipedal and humanoid in stance, their limbs are rather spindly, and the legs curve and twist similar to various arthropods, while their arms end in claws. Their heads notably have a dome-like structure that makes it resemble a kasa. A prominent set of mandibles can be seen. Concept art has shown what appears to be Gnath dwellings, towers resembling termite mounds.

The gnath are a warlike race, who are focused on expanding their territory. Unlike the other beastmen tribes, who generally summon their respective Primals out of desperation, the gnath summoned Ravana purely for the sake of conquest, hoping to use his power to take the lands held by the Dragons of Dravania.

The following feats are available to a gnath character who meets the prerequisites.

The following racial archetypes are available to gnaths: