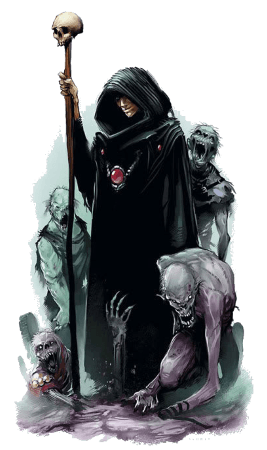 A practitioner of vile and forbidden arts, the necromancer roots about in graveyards, searching out moldering components for his obscene spells. He calls upon restless, tormented spirits of the dead, seeking their arcane secrets. He might be a consummate villain, or perhaps a tortured hero whose obsession with death leads his along questionable moral paths. They often take professions as surgeons, where a few untimely demises are common with the lack of advanced medical techniques and equipment, or undertakers, where fresh bodies aren’t hard to find. In either profession, they find acquiring bodies and or organs easy and without drawing too much suspicion. However, a necromancer won’t just raise any body. The true pride of a necromancer is constructing his own, choosing the best body parts and lovingly reattaching them to make a monstrosity that would strike the terror into the hearts of the bravest warriors.

Role: Necromancers often tend to provide support despite their insidious nature, filling roles when needed using their skeletons to protect, to heal, or to attack, while dealing death from afar.

Starting Wealth: 2d6 × 10 gil (average 70 gil.) In addition, each character begins play with an outfit worth 10 gil or less.

Class Main Ability Scores:
The necromancer mainly focuses on DEX for combat, and CHA for his class features and spells.

All of the following are class features of the necromancer.

Necromancers are proficient with the dagger, scythe, sickle, sling, power rod, power staff, and quarterstaff, but not with any type of armor or shield. Heavier armor interferes with a necromancer’s movements, which can cause his spells with somatic components to fail.

At 1st level, the necromancer receives the Limit Breaks (Grasp of the Dead and Incorporeal Form).

Grasp of the Dead (Su): This Limit Break causes a swarm of skeletal arms to burst from the ground to rip and tear at the necromancer’s foes within 60 feet. The skeletal arms erupt from the ground in a 20-foot-radius burst. Enemies within the area of effect take 1d6 points of shadow damage per necromancer level. Those caught in the area receive a Reflex save (DC 10 + half of the necromancer’s level + his Charisma modifier) for half damage. Those who fail the save are unable to move for 1 round. The skeletal arms disappear after 1 round. The arms must burst up from a solid surface.

Necromancers learn a number of cantrips, or 0-level spells. These spells are cast like any other spell, but they do not consume MP and may be used again. Necromancers begin with 4 0-level spells and gain an additional 0-level spell every three levels after 1st level.

Class Level: The character’s necromancer level. The necromancer’s class levels stack with levels of any other classes that are entitled to a bone commander for the purpose of determining the bone commander’s statistics.

Ability Score Increase (Ex): The bone commander adds +1 to any one of its ability scores.

Undead Traits (Ex): The bone commander has darkvision out to a range of 60 feet, has immunity to poison, sleep, disable, immobilize and stunning status effects. Immunity to any effect that requires a Fortitude save (unless the effect also works on objects or is harmless). Not at risk of death from massive damage, but is immediately destroyed when reduced to 0 hit points. Not affected by Raise spells or abilities. Absorbs any shadow damage, and takes half again as much from holy damage.

Armor/Weapon Proficiency (Ex): The bone commander is proficient with weapons and armor according to the class they emulate (as noted above).

Evasion (Ex): If a bone commander is subjected to an attack that normally allows a Reflex save for half damage, it takes no damage if it makes a successful saving throw.

At 1st level, as a standard action, a necromancer can infuse an undead creature within 30 feet with shadow energy. It gains a +1 profane bonus on all attack rolls and saving throws, as well as 1 temporary hit point per Hit Die and a +2 bonus to its turn resistance. The bonus on attack rolls and saving throws increases by +1 for every five necromancer levels he possesses. These bonuses last for a number of rounds equal to half his necromancer level (minimum 1 round). He can use this ability a number of times per day equal to 3 + his Charisma modifier.

At 3rd level, whenever the necromancer casts single-target spells that deals shadow damage to a living creature, he gains health back equal to spell level of the spell + his Charisma modifier. If this would put him above his normal hit point total, he can transfer the excess to his bone commander. Any excess left over on the bone commander above its normal hit point total dissipates.

Starting at 4th level, a necromancer gains a +2 bonus on saving throws made to resist sleep, stunning, paralysis, poison, or disease. This bonus increases to +4 at 11th level and then again to +6 at 18th level.

At 5th level, a necromancer can regain his MP quicker. The necromancer must be relaxed and must be free from overt distractions, such as combat raging nearby or other loud noises. For example, he could be riding in the back of a carriage and benefit from this ability. The necromancer does not gain this recovery if he is asleep or unconscious. The necromancer regains 1 MP per hour. This increases by 1 for every five necromancer levels after 5th.

Secrets of the Dead (Su)

At 6th level, the number of spirits talking to a necromancer, and the secrets they constantly whisper to him, takes a major upswing. As a result, the necromancer may add his necromancer level to any Knowledge and Diplomacy check regarding a dead or undead person or creature, necromancy, places where people are buried, or ceremonies regarding the dead.

At 7th level, the necromancer’s mastery over death and dying has progressed to the point where he can deny a foe the ability to send him into death’s embrace in a single, cowardly blow. Whenever anyone attempts a coup de grace on the necromancer, he automatically makes the subsequent Fortitude save. The attacker still deals just as much damage as he normally would, and the necromancer could still die from that damage. Similarly, when he takes massive damage (50 or more points of damage from a single attack), the necromancer automatically succeeds on the Fortitude save to survive the associated trauma, although he can be killed by sheer damage dealt.

At 7th level, the necromancer gains a form of blindsight that can detect living and undead creatures. The necromancer can only distinguish if the target is living or undead; constructs, oozes and equipment carried by the targets cannot be seen. The targets appear as semi-colorful silhouettes, and can be seen up to a range of 60 feet. Activating or deactivating this ability is a swift action, and turns the necromancer’s eyes black or dull grey. Spells that blind the necromancer have a 50% chance of negating this form of blindsight; blindfolds and shades have do not block life sight, but do block normal vision as usual.

Starting at 9th level, if a creature is within the necromancer’s fear aura at the beginning of its turn, the creature must succeed at a Fortitude save with a DC 10 + half of the necromancer’s level + his Charisma modifier or become sickened for 1 round. A creature of the animal, fey, or plant type that fails its save is nauseated for 1 round and sickened for 1 minute thereafter. If the creature makes its save, it is immune to this effect for 24 hours, as are creatures immune to disease.

All undead creatures created by a necromancer who has reached 11th level or higher gain a +4 enhancement bonus to Strength and Dexterity and 2 additional hit points per Hit Die.

As the necromancer comes closer and closer to his ultimate ascension into undeath, he also becomes more aware of how weak he used to be. At 12th level, when activating this ability as a standard action, he may choose between body and mind. Master of undeath lasts for a number of rounds equal to the necromancer’s caster level. He may use this ability one time per day per four necromancer levels he possesses.

At 12th, and every two levels thereafter, a necromancer learns further talents to assist him in manipulating undead and mastering necromancy. He may choose one of the following advanced necromancy talents in place of a necromancy talent. Talents marked with an asterisk add effects to a necromancer’s spellcasting ability. Only one of these talents can be applied to an individual spell and the decision must be made before the spell is cast.

At 13th level, when the necromancer casts a necromancy spell that conjures or creates undead, those created gain bonus hit points equal to half his necromancer level and gain a bonus to any saving throws versus effects that would damage, turn, or destroy them equal to his Charisma modifier.

At 16th level, when any undead the necromancer summoned is destroyed, it releases a burst of dark energy upon its destruction, dealing 1d6 points of shadow damage plus an additional 1d6 points per 2 Hit Dice to every creature within a 10-foot burst, a Reflex save (DC 10 + half of the undead’s Hit Dice + necromancer’s Charisma modifier) for half damage.

At 19th level, a necromancer can actually guide the spirit of a slain creature back to its body a number of times per day equal to the necromancer’s Charisma modifier, restoring the creature to life. This is only possible if the spirit is nearby, and thus this power must be used within 10 minutes since the creature’s death. This functions like the Arise spell except the casting time is 1 full round. Once a creature has been restored to life by a necromancer’s final guide ability, that creature cannot benefit from that ability again (from any necromancer) until 24 hours has passed.

When a necromancer attains 20th level, he undergoes a hideous transformation and becomes a lich. The necromancer gains the lich template (alignment reminds unchanged), forming a phylactery to house his soul in, as if he crafted it on his own.