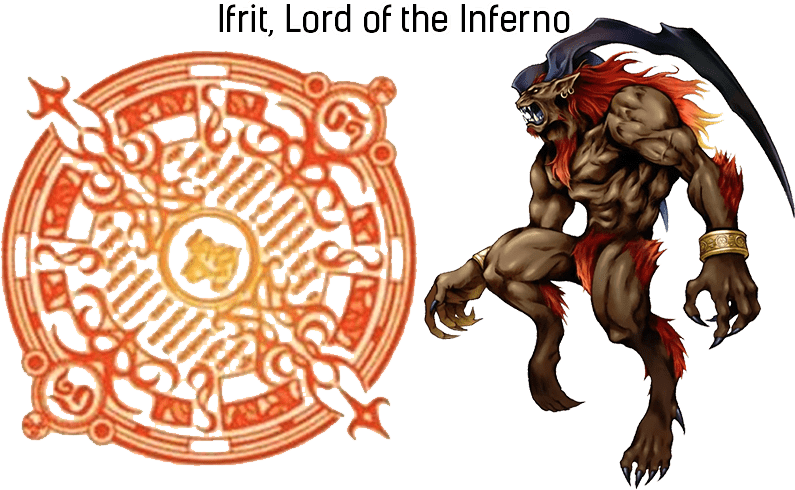 A Guardian Force (GF) is an independent energy force. Taking on the visage of the gods, GFs grant amazing powers to those who beat them in a contest of strength or wits. Each victory over a GF grants the victor a pact with the GF in the form of a magical tattoo on their bodies, the focal point where their powers converge.

While using this optional system characters are not limited to a single GF via the SeeD Operative prestige class, instead, they can gather several available GFs to swap between with their party. Aside from the changes below, GFs function the same as written on the SeeD Operative page.

Obtaining a GF: To obtain a new GF, the character or party must defeat a Primal, or enemy version of an Avatar from the summoner’s list. The conflict can be a straight-up fight, a rigorous maze or a set of puzzles. Characters do not need to be a SeeD Operative to obtain a new GF, though they cannot make any use of them until they become a SeeD Operative. When you defeat a GF, if a character does it alone only they get the mark, if a group defeats the GF then the group get a “shared mark”. You can only have 1 pact with the same type of Avatar as a GF.

GF Marking: After obtaining a new GF you will gain a mark from them that is randomly placed on your body, this mark cannot be erased as the power is infused into your soul and mind, though it can be covered up. Only 1 mark can take up the same space on your body. For a random body part you may roll on the following table, if there is a left and right side of a body-part roll a d2 with 1 being left and 2 being right:

Activating Marks: At the beginning of every day, you may spend 10 minutes activating a mark on your body, in doing so you set the GF associated with the mark as your GF for the day, replacing any previous mark activated as well as your personal GF for the rest of the day. Only 1 person may make use of a shared mark at a time.

Personal and Shared: Each SeeD Operative has a personal GF, whom they cannot share with others, gained through their class features. When activating a GF for the day they choose either their personal one or a GF they share with their allies through a shared mark.

Daily Abilities and Spells: When activating a GF mark, or choosing your personal GF, at the beginning of the day you will lose access to any of the spells or abilities gained from the other GFs. Any GF – Spells leftover from the previous day are lost and replaced with the Spells chosen of the new GF.

When you first swap into a GF after gaining a pact you make a choice of GF – Abilities as per the normal class feature, once you have chosen the selections cannot be changed. When you have reached a high enough level to gain a new ability you must make that choice immediately if you have a GF equipped or the next time you swap into them.

There are no maximums for marks of a GF, though a rough number of 88 is possible due to body space, you can hold as many as you have beaten in combat or wits. You may only benefit from 1 GF at a time, and cannot have the same shared GF as an ally activated unless it is your personal GF.