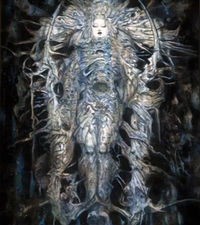 Born of a now-dead universe, Etro is one of three surviving deities who withstood the ordeal of the death of their home dimension and the birth of the current one. She, alongside her elder brother Pulse and younger sister Lindzei, has wandered the- relatively speaking, of course- infantile cosmos in search of a new place to call home; though they were all truly mighty divinities before, they have found that this latest universe does not suit their powers well, and so have been found wanting when attempting to create a new world from scratch. Thusly, they look for another world unto which they will offer their blessings in return for sanctuary and solace, and currently find themselves drawn to the world of Aeon Gaia. Etro’s role between the three of them is to regulate the cycle of birth, death, and rebirth that all mortals follow, stem the flow of the primordial chaos as it attempts to seep into the current world, and repair the damage that the chaos inflicts upon the fabric of space-time.

Like her siblings, Etro’s form is largely humanoid, but otherwise quite alien, appearing to be some kind of massive god-machine in the general shape of a woman. Though she is hardly ever seen in person, it is said that her clergy, the Seeresses, all bear some resemblance to her. Her highest-ranking cleric is the Oracle of Etro, Paddra Nsu-Yeul, who supposedly looks exactly like the death goddess, were she to be born of mortal flesh.

Etro loves all mortals, whether they worship her, scorn her, or are largely ignorant of her, and does her best to care for them. Her own following is somewhat small, but incredibly devoted: an entire holy city that follows the guidance of Seeress Yeul, who leads the people through visions granted to her by what of Etro’s power courses in her veins.