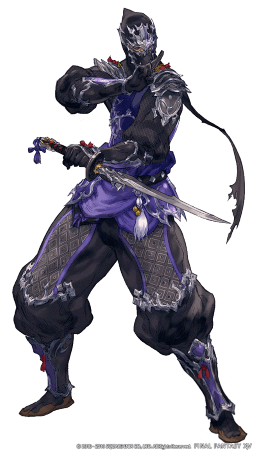 When the wealthy and the powerful need an enemy eliminated quietly and without fail, they call upon the ninja. When a general needs to sabotage the siege engines of his foes before they can reach the castle walls, he calls upon the ninja. And when fools dare to move against a ninja or her companions, they will find the ninja waiting for them while they sleep, ready to strike. These shadowy killers are masters of infiltration, sabotage, and assassination, using a wide variety of weapons, practiced skills, and mystical powers to achieve their goals.

Role: The ninja spends almost all of her time honing her skills, practicing her art, or working on her next assignment. Even when not specifically working, the ninja is ever vigilant and ready for the situation to turn deadly. Her line of work earns her many enemies, but it is a list that she frequently reduces through assassination and misdirection.

All of the following are class features of the ninja.

Ninjas are proficient with all simple weapons, plus the bolas, chakram, fuma shuriken, kama, katana, kunai, kusarigama, nunchaku, sai, shortbow, short sword, shuriken, siangham, starknife, wakizashi, and wushu dart. They are proficient with light armor but not with shields. As long as the ninja wears light or no armor, she can perform ninjutsus without spell failure.

At 1st level, the ninja receives the Limit Breaks (Missile Barrage and Shroud in Darkness).

Missile Barrage (Su): This Limit Break creates hundreds of thrown weapons that the ninja throws a barrage of them in a 30-ft.-cone. Enemies within the area of effect take 1d6 points of shadow damage per ninja level, a Reflex save (DC 10 + half of the ninja’s level + her Wisdom modifier) for half damage.

Shroud in Darkness (Su): This Limit Break makes the ninja invisible for a duration of 1 round + 1 round per four ninja levels after 1st. While invisible, the ninja can make attacks as normal and remain invisible. The ninja also receives a +1d6 sneak attack bonus + an additional 1d6 per four ninja levels after 1st while under this Limit Break. This limit break requires only a swift action.

A ninja performs ninjutsus which are drawn from the ninja ninjutsu list. A ninja begins play with 2 1st level ninja ninjutsus of her choice. Each time a character attains a new ninja level, she gains one ninjutsu of her choice to add to her list of ninjutsus. This free ninjutsu must be of ninjutsu level she can perform. Unlike most mages, a ninja cannot find or purchase scrolls with ninjutsus to add to her repertoire. Ninjutsus does not count as spells but like spells, ninjutsus can be modified by metamagic feats. In addition, only a ninja with ranks in Spellcraft can identify another ninja’s ninjutsus. Starting at 2nd level, a ninja can substitute MP for Ki points to perform ninjutsus, but not with metamagic feats.

To perform a ninjutsu, the ninja must have a Wisdom score equal to at least 10 + the ninjutsu level (Wis 11 for 1st-level ninjutsus, Wis 12 for 2nd-level ninjutsus, and so forth). Unlike spells, ninjutsus only require somatic gestures (typically mudra hand gestures) to cast. The Difficulty Class for a saving throw against a ninja’s ninjutsu is 10 + the ninjutsu level + the ninja’s Wisdom modifier. In addition, a ninja gains additional MP for having a high attribute (Wisdom).

If a ninja can catch an opponent when he is unable to defend himself effectively from her attack, she can strike a vital spot for extra damage. The ninja’s attack deals extra damage (called “precision damage”) anytime her target would be denied a Dexterity bonus to AC (whether the target actually has a Dexterity bonus or not), or when the ninja flanks her target. This extra damage is 1d6 at 1st level, and increases by 1d6 every three ninja levels thereafter. Should the ninja score a critical hit with a sneak attack, this extra damage is not multiplied. Ranged attacks can count as sneak attacks only if the target is within 30 feet. With a weapon that deals nonlethal damage (like a sap, whip, or an unarmed strike), a ninja can make a sneak attack that deals nonlethal damage instead of lethal damage. She cannot use a weapon that deals lethal damage to deal nonlethal damage in a sneak attack, not even with the usual –4 penalty. The ninja must be able to see the target well enough to pick out a vital spot and must be able to reach such a spot. A ninja cannot sneak attack while striking a creature with total concealment.

A ninja is highly trained at dodging blows, and she has a sixth sense that lets her avoid even unanticipated attacks. When unarmored and unencumbered, a ninja adds her Wisdom bonus (if any) to her AC and her CMD. In addition, a ninja gains a +1 bonus to AC and CMD at 1st level. This ability does not stack with the monk’s AC bonus ability (a ninja with levels of monk does not add the bonus twice). This bonus increases by 1 for every four levels thereafter (+2 at 5th, +3 at 9th, +4 at 13th, and +5 at 17th level). These bonuses to AC apply even against touch attacks or when the ninja is flat-footed. She loses these bonuses when she is immobilized or helpless, when she wears any armor, when she carries a shield, or when she carries a medium or heavy load.

All ninjas gain the Throw Anything feat as a bonus feat at 1st level.

At 2nd level, a ninja can avoid even magical and unusual attacks with great agility. If she makes a successful Reflex saving throw against an attack that normally deals half damage on a successful save, she instead takes no damage. Evasion can be used only if the ninja is wearing light armor, or no armor. A helpless ninja (such as one who is unconscious or paralyzed) does not gain the benefit of evasion.

Starting at 2nd level, a ninja gains one ninja trick. She gains one additional ninja trick for every 2 levels attained after 2nd. Unless otherwise noted, a ninja cannot select an individual ninja trick more than once. Talents marked with an asterisk add effects to a ninja’s sneak attack. Only one of these talents can be applied to an individual attack, and the decision must be made before the attack roll is made.

At 2nd level, a ninja gains a pool of ki points, supernatural energy she can use to accomplish amazing feats. The number of points in the ninja’s ki pool is equal to half her ninja level + her Wisdom modifier. As long as she has at least 1 point in her ki pool, she treats any Acrobatics skill check made to jump as if she had a running start. At 10th level, she also reduces the DC of Acrobatics skill checks made to jump by half (although she still cannot move farther than her speed allows).

The ki pool is replenished each morning after 8 hours of rest or meditation; these hours do not need to be consecutive. If the ninja possesses levels in another class that grants points to a ki pool, ninja levels stack with the levels of that class to determine the total number of ki points in the combined pool, but only one ability score modifier is added to the total. The choice of which score to use is made when the second class ability is gained, and once made, the choice is set. The ninja can now use ki points from this pool to power the abilities of every class she possesses that grants a ki pool.

At 3rd level, a ninja learns to cover her tracks, remain hidden, and conceal her presence. The DC to track a ninja using the Survival skill increases by +1. In addition, her training gives her a +1 insight bonus on Disguise skill checks and on opposed Stealth checks whenever she is stationary and does not take any action for at least 1 round. Every three levels thereafter, the increase to Survival DCs and the bonuses on Disguise and opposed Stealth checks increase by 1.

As a ninja continues her training, she learns ki powers that allow her to confuse her foes and grant her supernatural abilities. Starting at 3rd level and every two ninja levels thereafter, a ninja learns a new ki power from the list below. Some ki powers have prerequisites. Unless otherwise noted, a ninja cannot select an individual ki power more than once.

At 5th level, as a swift action once per day, a ninja can mark an opponent damaged by her sneak attack for death. A ninja gains a +1 competence bonus on attack and damage rolls against an opponent affected by death mark as well as on Survival checks to track the marked creature. The bonuses from death mark and its number of uses per day increase by 1 at 10th, 15th, and 20th levels. The effects of death mark last for 24 hours, until the marked creature is slain, or until the ninja chooses to mark another creature, whichever comes first.

At 6th level, a ninja learns to move while barely touching the surface underneath her. As a full-round action, she can move up to twice her speed, ignoring difficult terrain. While moving in this way, any surface will support her, no matter how much she weighs. This allows her to move across water, lava, or even the thinnest tree branches. She must end her move on a surface that can support her normally. She cannot move across air in this way, nor can she walk up walls or other vertical surfaces. When moving in this way, she does not take damage from surfaces or hazards that react to being touched, such as lava or caltrops, nor does she need to make Acrobatics checks to avoid falling on slippery or rough surfaces. Finally, when using light steps, the ninja ignores any mechanical traps that use a location-based trigger.

A ninja of 8th level can no longer be flanked; she can react to opponents on opposite sides of her as easily as she can react to a single attacker. This defense denies creatures the flanking bonus by flanking her, unless the attacker has at least four more ninja levels than the target does.

At 10th level, a ninja’s ability to be stealthy becomes second-nature. A ninja with this ability is always considered to be taking 10 on Stealth skill checks.

At 12th level, and every two levels thereafter, a ninja can select one of the following master tricks in place of a ninja trick.

At 14th level, the ninja can use the Stealth skill even while being observed.

At 16th level, as a move action, the ninja can step into the shadows and appear out of a shadow within 30 feet.

At 17th level, the ninja’s sneak attack damage applies on the first attack she makes each round against the target of her death mark ability, even if it normally wouldn’t. Other effects that trigger on a sneak attack do not apply with this ability.

At 19th level, a ninja becomes a true master of her art. She can, as a standard action, cast superior vanish on herself. While invisible in this way, she cannot be detected by any means, and not even true seeing can reveal her. She uses her ninja level as her caster level for this ability. Using this ability consumes 3 ki points from her ki pool. In addition, whenever the ninja deals sneak attack damage, she can sacrifice additional damage dice to apply a penalty to one ability score of the target equal to the number of dice sacrificed for 1 minute. This penalty does not stack with itself and cannot reduce an ability score below 1.

At 20th level, the ninja is a creature of wind and blades. When using light steps, the ninja can move up to four times her speed and make a single attack at her highest base attack bonus at any point during the movement.