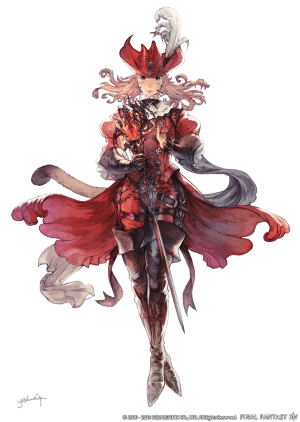 Everyone wants to do something. Some people want to heal and help others, whether by magical or non-magical means. Some wish to become great warriors, forging their names in battle and increasing their martial prowess. Some wish to become better magicians, learning new spells or having better control over powers they already have. Others wish to become more skillful, learning new skills and becoming better at the skills they already have. But there are a rare few who wish to do everything at once. These skilled individuals are known as red mages. Red magic is an ancient arcane tradition that blends offensive spells, curative magic, and melee combat. While red mages do not belong to an organization, they tend to wear distinctive garb and share mannerisms and signals, allowing them to recognize each other and work together on short notice.

Role: Red mages spend much of their time traveling the world, learning whatever martial or arcane secrets they can find. They might spend months learning a new sword-fighting style from a master warrior, while simultaneously moonlighting in the local library, poring through tomes of ancient lore. Most who take this path dabble in all sorts of lore, picking up anything that might aid them in their search for perfection.

All of the following are class features of the red mage.

Red Mages are proficient with all simple and martial weapons, including all power weapons (melee and ranged). They are also proficient with light armor, medium armor, and shields (except tower shields).

Dual Spellcasting (Su): This Limit Break allows the red mage to cast a healing spell and a damage spell in the same round for a duration of 1 round + 1 round per four red mage levels after 1st. MP must be paid for both spells. This limit break requires only a swift action.

Flexibility (Su): This Limit Break allows the red mage to change his current HP total and current MP total on the fly. Once per round as a free action, for a duration of 1 round + 1 round per four red mage levels after 1st, the red mage can swap any number of points from HP to MP or from MP to HP on a 3 to 1 basis (3 HP to 1 MP). The red mage cannot swap below 1 hit point. This limit break requires only a swift action.

A red mage casts red magic spells which are drawn from the red mage spell list. A red mage begins play with 3 1st level red mage spells of his choice. The red mage also selects a number of additional 1st-level spells equal to his Charisma modifier to add to his list of spells. Each time a character attains a new red mage level, he gains two spells of his choice to add to his list of spells. The two free spells must be of spell levels he can cast. Like most mages, a red mage can find or purchase scrolls with spells to add to his repertoire.

To learn or cast a red mage spell, the red mage must have a Charisma score equal to at least 10 + the spell level (Cha 11 for 1st-level spells, Cha 12 for 2nd-level spells, and so forth). The Difficulty Class for a saving throw against a red mage’s spell is 10 + the spell level + the red mage’s Charisma modifier. In addition, a red mage gains additional MP for having a high attribute (Charisma—see Table: Bonus MP per Day (by Spell Level) on the MP System page).

At 1st level and every four red mage levels thereafter, a red mage increases his power with his spells. At each such opportunity, he can choose from the list of the following (with a maximum of 2 per):

Red mages learn a number of cantrips, or 0-level spells. These spells are cast like any other spell, but they do not consume MP and may be used again. Red mages begin with 2 0-level spells and gain an additional 0-level spell every four levels after 1st level.

At 1st level, a red mage learns to cast spells and wield his weapons at the same time. This functions much like two-weapon fighting, but the off-hand weapon is a spell that is being cast. To use this ability, the red mage must have one hand free, while wielding a light or one-handed melee weapon in the other hand. As a full-round action, he can make all of his attacks with his melee weapon at a –2 penalty and can also cast any spell from his red mage spell list with a casting time of 1 standard action (any attack roll made as part of this spell also takes this penalty). If he casts this spell defensively, he can decide to take an additional penalty on his attack rolls, up to his Charisma bonus, and add the same amount as a circumstance bonus on his Concentration check. If the check fails, the spell is wasted, but the attacks still take the penalty. A red mage can choose to cast the spell first or make the weapon attacks first, but if he has more than one attack, he cannot cast the spell between weapon attacks. This ability applies only to spells that he casts as a red mage, not to those he might have by virtue of levels in another class.

At 2nd level, the red mage gains a reservoir of mystical arcane energy that he can draw upon to fuel his powers and enhance his weapon. This arcane pool has a number of points equal to half his red mage level (minimum 1) + his Charisma modifier. The pool refreshes once per day when the red mage rests for a full 8 hours.

At 2nd level, a red mage can expend 1 point from his arcane pool as a swift action to grant any weapon he is holding a +1 enhancement bonus for 1 minute. For every four levels beyond 2nd the weapon gains another +1 enhancement bonus, to a maximum of +5 at 18th level. These bonuses can be added to the weapon, stacking with existing weapon enhancement to a maximum of +5. Multiple uses of this ability do not stack with themselves.

Adding these properties consumes an amount of bonus equal to the property’s base price modifier. These properties are added to any the weapon already has, but duplicates do not stack. If the weapon is not magical, at least a +1 enhancement bonus must be added before any other properties can be added. These bonuses and properties are decided when the arcane pool point is spent and cannot be changed until the next time the red mage uses this ability. These bonuses do not function if the weapon is wielded by anyone other than the red mage.

A red mage can only enhance one weapon in this way at one time. If he uses this ability again, the first use immediately ends.

At 2nd and 6th level, the red mage chooses one of the following abilities to add to his list of class features:

At 2nd level, whenever a red mage casts a touch (melee or ranged) spell from the red mage spell list, he can deliver the spell through any weapon he is wielding as part of a melee attack. Instead of the touch attack normally allowed to deliver the spell, a red mage can make one free melee attack with his weapon (at his highest base attack bonus) as part of casting this spell. If successful, this melee attack deals its normal damage as well as the effects of the spell. If the red mage makes this attack in concert with spell combat, this melee attack takes all the penalties accrued by spell combat melee attacks. This attack uses the weapon’s critical range (20, 19–20, or 18–20 and modified by the keen weapon property or similar effects), but the spell effect only deals ×2 damage instead of maximize damage on a successful critical hit, while the weapon damage uses its own critical modifier.

As he gains levels, a red mage learns arcane secrets tailored to his specific way of blending martial puissance and magical skill. Starting at 3rd level, a red mage gains one ruby arcana. He gains an additional ruby arcana for every three levels of red mage attained after 3rd level. Unless specifically noted in a ruby arcana’s description, a red mage cannot select a particular ruby arcana more than once. Ruby arcana that affect spells can only be used to modify spells from the red mage spell list unless otherwise noted.

Beginning at 4th level, once per day, a red mage can cast one spell up to 6th level spells as a swift action, so long as the casting time of the spell is 1 standard action or less. He can use this ability an additional time per day for every four red mage levels thereafter.

Starting at 4th level, the red mage can more easily overcome the spell resistance of any opponent he successfully injures with a melee attack. If he has injured an opponent with a melee attack, he gains a +2 bonus on his caster level check to overcome spell resistance for the remainder of the encounter. This bonus increases to +3 at 9th level, to +4 at 14th level, and to +5 at 19th level.

At 5th level, a red mage can regain his MP quicker. The red mage must be relaxed and must be free from overt distractions, such as combat raging nearby or other loud noises. For example, he could be riding in the back of a carriage and benefit from this ability. The red mage does not gain this recovery if he is asleep or unconscious. The red mage regains 1 MP per hour. This increases by 1 for every five red mage levels after 5th.

At 8th level, the red mage’s ability to cast spells and make melee attacks improves. When using the spell combat ability, the red mage receives a +2 circumstance bonus on concentration checks, in addition to any bonus granted by taking an additional penalty on the attack roll.

At 10th and 14th level, the red mage may add one of the following abilities to his list of class features.

Starting at 11th level, a red mage counts half his total red mage level as his fighter level for the purpose of qualifying for feats. If he has levels in fighter, these levels stack.

At 14th level, the red mage gains the ability to seamlessly cast spells and make melee attacks. Whenever he uses the spell combat ability, his concentration check bonus equals double the amount of the attack penalty taken.

At 15th level, a red mage can cast two spells using one standard action. Both of the spells must have the same standard action casting time. The red mage can make any decisions concerning the spells independently of each other. Any target affected by both of the spells takes a –4 penalty on saves made against each spell. A red mage receives a +4 bonus on caster level checks made to overcome spell resistance with these two spells. The red mage may use this ability once per day at 15th level and one additional time per day at 20th level.

At 18th level, three times per day, as a free action, a red mage can reduce the cost of his next spell to 1 MP. The use of this ability cannot be used with metamagic feats.

At 19th level, the red mage may add one of the following abilities to his list of class features:

At 20th level, the red mage becomes a master of spells and combat. Whenever he uses his spell combat ability, he does not need to make a concentration check to cast the spell defensively. Whenever the red mage uses spell combat and his spell targets the same creature as his melee attacks, he can choose to either increase the DC to resist the spell by +2, grant himself a +2 circumstance bonus on any checks made to overcome spell resistance, or grant himself a +2 circumstance bonus on all attack rolls made against the target during his turn.