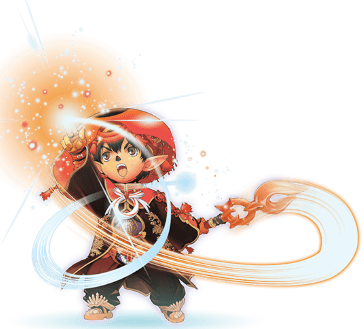 Geomancers hold the power of the elements. Geomancy is the art of channeling magical energy from many sources through the land itself. In the area she calls home (be it high on a mountain, deep in a forest, or even beneath an ocean) she weaves ley lines—powerful connections to the land itself. The spells she casts through these connections with the earth are reflections of her own strength of will.

Role: Unmatched in the mastery of the terrain, geomancers use the terrain to inflict powerful elements and status effects upon their enemies and provide support to her allies.

All of the following are class features of the geomancer.

At 1st level, the geomancer receives the Limit Breaks (Elemental Torrent and Geocache).

To learn or cast a spell, the geomancer must have a Wisdom score equal to at least 10 + the spell level (Wis 11 for 1st-level spells, Wis 12 for 2nd-level spells, and so forth). The Difficulty Class for a saving throw against a geomancer’s spell is 10 + the spell level + the geomancer’s Wisdom modifier. In addition, a geomancer gains additional MP for having a high attribute (Wisdom—see Table: Bonus MP per Day (by Spell Level) on the MP System page).

A geomancer gains a +2 bonus on Knowledge (nature) and Survival checks.

Geomancers learn a number of cantrips, or 0-level spells. These spells are cast like any other spell, but they do not consume MP and may be used again. Geomancers begin with 4 0-level spells and gain an additional 0-level spell every three levels after 1st level.

At 2nd level, the geomancer learns to create magical connections with a specific type of terrain. Choose one of the following terrain types: aquatic, desert, forest, hills, marsh, mountains, or plains. In that terrain, the geomancer’s effective caster level for all spells increases by +1. At 6th level and every 4 levels thereafter, the character may either choose a new terrain in which to receive the benefit (at +1), or increase her effective caster level in a previously chosen terrain by an additional +1.

Starting at 2nd level, the geomancer gains an elemental resistance of 2 to earth, fire, ice, lightning, water, and wind. This resistance increases by 2 every four geomancer levels after 2nd level.

Eyes of the Storm (Ex)

At 2nd level, a geomancer can see through 10 feet of magical fog, mist, gas, wind, rain, or similar inclement weather conditions, ignoring any concealment it might grant. This distance increases by 5 feet for every four geomancer levels beyond 2nd.

Starting at 3rd level, a geomancer may select a type of terrain from Table: Favored Terrains. The geomancer gains a +2 bonus on Initiative checks and Knowledge (geography), Perception, Stealth, and Survival skill checks when she is in this terrain. A geomancer traveling through her favored terrain normally leaves no trail and cannot be tracked (though she may leave a trail if she so chooses).

At 7th level and every four levels thereafter, the geomancer may select an additional favored terrain. In addition, at each such interval, the skill bonus and initiative bonus in any one favored terrain (including the one just selected, if so desired), increases by +2.

If a specific terrain falls into more than one category of favored terrain, the geomancer’s bonuses do not stack; she simply uses whichever bonus is higher.

At 3rd level, normally, armor of any kind interferes with a spell-caster’s gestures, which can cause spells to fail if those spells have a somatic component. A geomancer’s limited focus and specialized training, however, allows her to avoid spell failure so long as she sticks to light armor and light shields. This training does not extend to medium armor or heavy shields. This ability does not apply to spells gained from a different spell-casting class.

At 4th level, a geomancer has learned to access her favored terrain, wherever she may be. Once per day, as a swift action, she may treat the area within a 30-ft radius burst centered on her as one of her favored terrain (chosen upon activation). This ability lasts for 1 round per geomancer level. She gains an additional use of this ability at 8th, 12th, 16th and 20th level.

At 12th level, the homefield advantage’s radius increases by another 10-ft. The duration for this ability is now in minutes per geomancer level.

At 16th level, the homefield advantage’s radius increases by another 10-ft.

At 20th level, the duration for this ability is now 10 minutes per geomancer level.

At 5th level, a geomancer can regain her MP quicker. The geomancer must be relaxed and must be free from overt distractions, such as combat raging nearby or other loud noises. For example, she could be riding in the back of a carriage and benefit from this ability. The geomancer does not gain this recovery if she is asleep or unconscious. The geomancer regains 1 MP per hour. This increases by 1 for every five geomancer levels after 5th.

As per the Endure Elements spell, a geomancer of 5th level is constantly protected against extremes of temperature.

Starting at 9th level, a geomancer benefits from Tremorsense out to 30 feet in any favored terrain she has chosen. The geomancer automatically senses the location of anything that is in contact with the ground and within range. If her favored terrain is water, she can also sense the location of creatures moving through water. If no straight path exists through the ground from the geomancer to those she is sensing, then the range defines the maximum distance of the shortest indirect path. She must herself be in contact with the ground, and the creatures must be moving. As long as the other creatures are taking physical actions, including casting spells, they’re considered moving; they don’t have to move from place to place for the geomancer to detect them.

After attaining 11th level, a geomancer no longer takes ability score penalties for aging and cannot be magically aged. Any penalties she may have already incurred, however, remain in place. Bonuses still accrue, and the geomancer still dies of old age when her time is up.

Starting at 13th level, a geomancer benefits from Blindsense out to 30 feet while in any favored terrain she has chosen. Blindsense lets the geomancer notice things it cannot see, but without the precision of blindsight. The geomancer with blindsense usually does not need to make Perception checks to notice and locate creatures within range of its blindsense ability, provided that it has line of effect to that creature. Any opponent the geomancer cannot see has total concealment (50% miss chance) against her, and she still has the normal miss chance when attacking foes that have concealment. Visibility still affects the movement of the geomancer. The geomancer is still denied her Dexterity bonus to Armor Class against attacks from creatures she cannot see.

At 13th level, a geomancer is unaffected by natural and magical wind effects (such as the squall status effect). She also becomes immune to deafness and gains +2 bonus on saving throws against wind spells.

Tongue of the Sun and Moon (Ex)

At 17th level, a geomancer can speak with any living creature.

Starting at 17th level, a geomancer benefits from Blindsight out to 30 feet while in any favored terrain she has chosen. This ability makes invisibility and concealment (even magical darkness) irrelevant to the geomancer (though she still can’t see ethereal creatures and must have line of effect to a creature or object to discern that creature or object).

After attaining 19th level, a geomancer gains great power and manifests a portion of the raw energy of the universe with themselves. As such, they gain great power depending on which elemental plane of existence they choose. Whichever plane they choose, they become completely immune to all of the negative effects of the plane as if they were native to that plane and any spells that would be dampened because of the plane (Water spells in the Fire plane), are cast as normal spells by the geomancer. This ability can be switched, altering which plane the geomancer is acclimated to, every day, but it cannot be changed after she makes her decision for the day.

Also at 20th level, the geomancer transcends her mortal form. She is now considered an outsider and is immune to bleed, paralysis, poison, sleep effects and stunning. The geomancer is no longer subject to critical hits or flanking. Further, the geomancer no longer ages and removes any age related penalties she currently has.