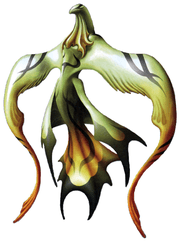 As the gods moved from world to world, creating new life, they came across another creature whose aptitude for becoming an Astral was high enough to add them into the fold. A soaring bird who flew so fast, creating static among the clouds within its own coat, Quetzalcoatl had a natural connection to static electricity. Upon being gifted the power of an Astral, Quetzalcoatl continued his experimentation into static and pulse energies. With his knowledge, he bestowed static and pulse onto his creations, allowing for explosive devices and those that could counter mechanical beings. He shares duties with Ixion and Ramuh, while having a much more focused field, similar to Fenrir.

Quetzalcoatl is a gargantuan yellow bird with blue swirling designs across his smooth coat of fur. His head is smooth and sloped up to his beak, where he channels the static electricity through his body to shoot it at enemies.

Followers of Quetzalcoatl often follow him for his insight into explosive devices and static electricity, where Robots often fear his power.