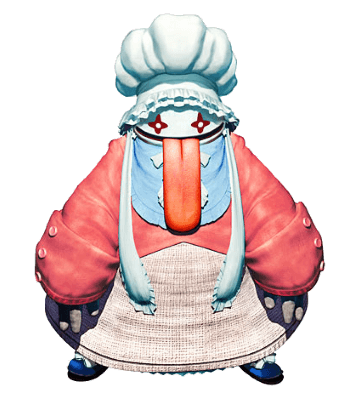 The Qus are a race of strange, swamp-dwelling humanoids reputed for their huge appetites and cooking talent. Their greatest achievement is the Way of the Gourmand, which sums every aspects of their life. The Way of the Gourmand defines the life of a Qu. Knowledge, power and personal growth can be attained by eating and discovering new knowledge of food. They have somewhat limited attention spans and wit, despite not being stupid at all, but won’t try to understand what is beyond their own limits. They are grounded in reality and won’t be impaired by the chaos around them or dramatic events. Qus are tall, bulky humanoids with a pale, milky skin. Their almost featureless body is covered by strong muscles and healthy fat. Their round belly occupies most of their body mass, their most powerful asset. Their bulbous head and short, stumpy legs generally make them above 6 feet tall. Their long, lanky arms hang to the sides of their body when left unattended. The Qu’s faces are commonly described as “a gross, doll-looking face with rounded, cross-shaped eyes and a wound-like mouth going side to side, gifted with a tongue larger than my arm.” They favor brightly colored clothes and cook outfits, and usually weigh about 400 pounds. The Qus are truly affectionate beings and love spending time with friends, as long as these agree to help on the Way of the Gourmand (by catching some exotic food, for example).

The following feats are available to a qu character who meets the prerequisites.

The following racial archetypes are available to qus: