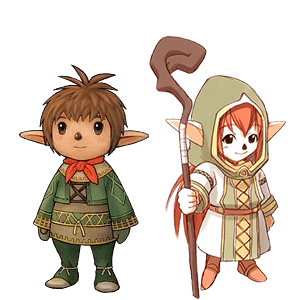 Tarutarus resemble children in size, though this does not reflect their age. In fact, they do not seem to change their appearance at all as they age. The Tarutaru are said to understand the importance of the balance between natural harmony and magic. Tarutarus lack the physical strength and durability of their fellow enlightened races as a result of their racial prejudice towards magical study, but they do control greater reserves of magical power as a result, and are the most studious and intelligent of the races.

Although many tarutarus follow the general model of the standard tarutaru, many more do not. Those of different lineages may evince dramatically different manifestations of their heritage, both in appearance and in ability. Here are 4 different potential heritages for tarutaru PCs. If you choose to use a specific bloodline instead of the general rules for creating a tarutaru, you should work with your GM to ensure that your character’s appearance reflects that bloodline.

The following feats are available to a tarutaru character who meets the prerequisites.

The following racial archetypes are available to tarutarus: