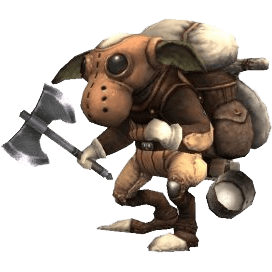 Goblins, colloquially referred to as Gobs or Gobbies, are a race of Beastmen found in most regions of Vana’diel. Their flexible lifestyle and adaptability to the surrounding environment have given them the ability to coexist with other beastmen as well as the Enlightened Races. Compared to other beastmen, Goblins have developed superior techniques in trades such as smithing and healing. Because of their prevalence and semi-integration into the nations of Vana’diel, studies of Goblins have been undertaken to better understand their lifestyle. Of some interest is Goblin naming conventions—which appear to be rather strict. An “-ix” ending on a goblin’s name designates it as a male goblin while “-ox” is for female goblin names.

Although many goblins follow the general model of the standard goblin, many more do not. Those of different lineages may evince dramatically different manifestations of their heritage, both in appearance and in ability. Here are 2 different potential heritages for goblin PCs. If you choose to use a specific bloodline instead of the general rules for creating a goblin, you should work with your GM to ensure that your character’s appearance reflects that bloodline.

The following feats are available to a goblin character who meets the prerequisites.

The following racial archetypes are available to goblins: