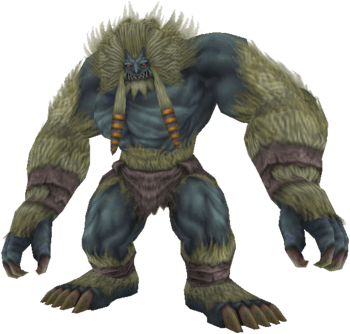 This large hairy ape-like creature ranges between 8-12 feet tall, weighs in excess of 500 pounds and is covered in snowy white fur.

When the wendigo takes damage in combat, on its next turn it can fly into a rage as a free action. It gains +2 Constitution and +2 Strength, but takes a -2 penalty to its AC. The rage lasts as long as the battle or 1 minute, whichever is shorter. It cannot end its rage voluntarily.

Once per day and when below 50% hit points, a wendigo can root itself in place, powering up its defenses and countering any physical attack. Using this ability, a wendigo gains DR 10/- and is able to counterattack once per round, once per opponent. Also, the wendigo will be unable to move but is also immune to Bull Rush combat maneuvers. This ability lasts 1 minute. Blue mages may learn this ability as a 5th level spell (DC 25).