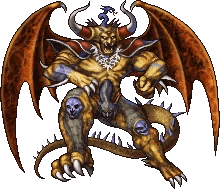 A thick, brassy hide, stronger than steel, stretches over this towering humanoid figure. His claws, scales, wings, and tail almost suggest a draconic origin, but a face so demonic could belong to none but a fiend. Born of clashing elements bound with the magic of time, the being standing before you, Chaos, gives a wicked grin and urges you forth to be slain. – Manly Man

This Burst Mode lets Chaos take hold of the laws of the space-time continuum and grind them into the finest powder. For a number of rounds equal to 1 + 1 round for every four HD, the DCs of his spells increase by 2, his elemental resistance is doubled, and it also applies to non-elemental damage as well. He is also granted one extra standard action and swift action per round, which can be used to break the usual limit of only casting two spells per round.

Once per round, Chaos may spend a number of MP as an immediate action when attacked or subjected to a creature’s ability that would inflict damage; the MP spent must be equal to half of the offender’s HD, rounded up. Doing so negates the damage entirely, although any other effects of the attack or ability occur as normal.

Chaos’ attunement to all of the elements lets him enjoy a much sturdier balance when it comes to elemental effects. Any ability or effect that ignores or reduces elemental resistance has no effect upon Chaos’ own resistances, and all spells dealing damage of any element, as well as non-elemental, that affect him cannot in any way, shape, or form lower or ignore his spell resistance or treat it as though it was lower.

The influence of the chronomantic energy coursing through his body has rendered Chaos resistant to the ravages of the warping of time. When he casts spells of the Chronomancy school that would inflict some kind of penalty or negative status effect on himself, such as celerity, he is instead sickened for 1 round if the penalty or status effect would be harsher.