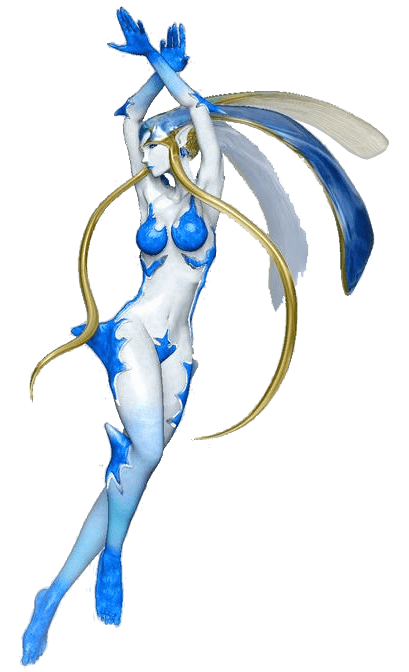 Shiva is the patron saint and primal of the Harriers. She was summoned by Ysayle in the image of an ancient saint who was beloved of Hraesvelgr, as part of her goal to end the millennium-long Dragonsong War. Unlike the Primals summoned by beast-tribes, Ysayle uses her own body as a vessel for Shiva’s spirit.

Once per day, as a free action at the beginning of combat, Shiva summons a hailstorm for 20 rounds, dealing 3d6 bludgeoning damage and 2d6 ice damage every other turn. A successful Reflex save (DC 23) halves the damage on each instance of damage. Blue mages may learn this ability as a 5th level spell (Knowledge: Planes DC 25).

Once every 1d4 rounds, as a standard action, Shiva slashes in a 30-foot cone in front of her, hitting all creatures inside, dealing her sword’s damage. She makes an attack roll against each target within the cone, taking a -1 penalty per target in the cone.

At the start of every turn, Shiva increases the damage of all her ice abilities by 1. In addition, every 5th round, she increases her dice step by one for ice abilities.

3/day, on a turn that Hailstorm deals damage, instead of the damage, Shiva may choose to freeze the very air in a 120 ft radius, dealing 4d6 ice damage and inflicting the frozen status for 1 rounds, then after for 1d4 rounds. A successful Fortitude save (DC 23) negates the additional rounds. Enemies that do not pass the Fortitude save or receive a dispel take an additional 2d6 ice damage at the end of the duration.

As a standard action, Shiva may make a single attack against a target that is frozen. If the attack hits, it is considered an automatic critical hit and ends the frozen effect.

Once a day, under 50% health, as a standard action, Shiva calls forth a mighty blizzard, freezing nearby foes. Enemies within 60 feet take 15d6 points of ice damage and are inflicted with the frozen status. A successful Reflex save (DC 24) halves the damage and negates the status effect.