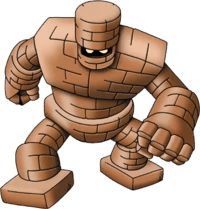 A massive monster that appeared from a faraway world. Made from clay and built like brick outhouses, golems are often found guarding bases.

A clay golem can cause the ground to erupt around it within a 30-ft.-radius. Creatures within the area of effect take 8d6 points of earth damage and are inflicted with the Weighted status effect (Reflex save DC 18 for half damage and negates the status effect). Blue mages may learn this ability as a 4th level spell (Knowledge: Arcana or Technology DC 23).

After it has engaged in at least 1 round of combat, a clay golem can haste itself once per day as a free action. The effect lasts 3 rounds and is otherwise the same as the spell.

Clay golem throws a huge boulder and hurls it at a foe. Clay golem makes a ranged touch attack roll against a target within 30 feet. If the attack hits, he deals 3d6+6 points of earth damage and the target must make a Fortitude save (DC 17) or be inflicted with Slow status for 1d4 rounds. Blue mages may learn this ability as a 3rd level spell (Knowledge: Arcana or Technology DC 19).

A clay golem’s body must be sculpted from a single block of clay weighing at least 1,000 pounds, treated with rare oils and powders worth 1,500 gil.