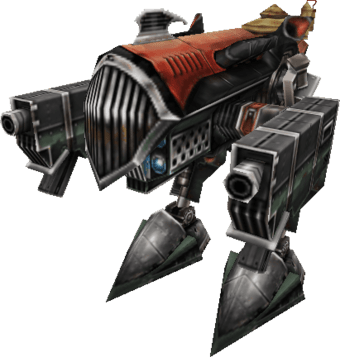 A mechanical monster from Midgar, a city in a distant world. It patrols Shinra’s mako reactors. They are very resilient and can absorb a great deal of damage. They attack using machine guns mounted on their arms. They are vulnerable to lightning, so using magic should prove to be quite effective.

Once every 1d4 rounds when taking a full attack action, a sweeper can attack with melee and ranged integrated weapons simultaneously.

Once every 1d4 rounds as a full-attack action, a sweeper can release a 30-ft.-cone flame from it’s core outward doing 4d6 points of fire damage and any creature hit by the flaming cone must also succeed at a DC 15 Reflex save or catch fire with no half damage, taking an addition 2d6 points of fire damage each round until the flames are extinguished. This is a wisdom-based save.

These modern firearms have a range increment of 120 feet, automatically reload as a free action, and misfires on a 1 or 2. A sweeper’s core can process scrap metal into new ammunition, effectively giving sweeper infinite ammo with these weapons.

Once every 1d4 rounds as a standard action, a sweeper can use its machine guns to fire in a 60-foot cone. When it does so, it makes a single machine gun attack against every target in this area.