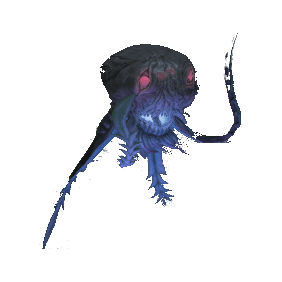 A fairy that floats around in the air giving off a white light. During the day it loiters around various places, preying on any humans it finds. Though the motive is unknown, they have been found gathering above the ocean from night to dawn. It is widely known that the ocean becomes choppy and tumultuous when shiranuis are found.

Once every 1d6+1 rounds, the wisp’s ability to create a surprisingly pleasant sound not unlike that of a tiny fiddle. The wisp creates a catchy tune that compels any creature within a 20-foot spread to dance and caper. A creature can resist this compulsion by making a successful Will save (DC 16). Creatures that fail are compelled to dance and shuffle their feet, and are effectively staggered for the duration of this spell. Once a creature makes the save against this spell, it is immune to further fiddle effects from that caster for 24 hours. This is a sonic mind-affecting effect. Blue mages may learn this ability as a 1st level spell (Knowledge: Nature DC 17).

Wisp are immune to all spells and spell-like abilities that allow spell resistance, except non-elemental related spells or better.

Wisp have the ability to extinguish their natural glow as a move action, effectively becoming invisible, as per the spell.