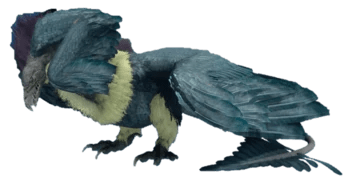 A giant bird with wings so red they appear to be on fire. Known for living incredibly long, it is worshipped by some as a holy beast. There are many ancient cave drawings depicting a red bird as the symbol of immortality which many have thought to be the bennu. However, recent research has shown this to be a completely different bird. Even so, there are still many people who believe it to be the bennu, and there are still even places where sacrificial ceremonies are held in its honor.

Once every 1d2 turns, a bennu can make an attempt to blind an opponent with their bite, if he hits, their target must make a Fortitude save (DC 14) or be blind for 1d4 rounds.

A bennu deals fire damage in addition to damage dealt on a successful hit in melee. Those affected by the burn ability must also succeed on a Reflex save or catch fire, taking the listed damage for an additional 1d4 rounds at the start of its turn. A burning creature can attempt a new save as a full-round action. Dropping and rolling on the ground grants a +4 bonus on this save. Creatures that hit a burning creature with natural weapons or unarmed attacks take fire damage as though hit by the burning creature and must make a Reflex save to avoid catching on fire.

Once every 1d4+1 rounds, a bennu can burst a single enemy into flames within 30 feet for 4d6 points of fire damage and is inflicted with the Blind status effect for 1d4 rounds unless they make a Fortitude save (DC 15). Blue mages may learn this ability as a 2nd level spell (Knowledge: Arcana DC 19).