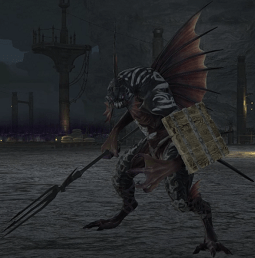 Sahagins have been blessed by their god, allowing them to breathe both in and out of the water making it ideal to fish and gather materials off of the sea floor for trading purposes.

1/day, a sahagin that takes damage in combat can fly into a frenzy in the following round. It gains +2 Constitution and +2 Strength, but takes a -2 penalty to its AC. The frenzy lasts as long as the battle or 1 minute, whichever is shorter.

Bond to the Depths (Ex)

Sahagin gain a +2 dodge bonus to AC when in shallows and deep water terrain.

1/day, Sahagin share the power of Leviathan gaining Enwater for 2 turns or until discharged on his weapon or fist. This effect deals an extra 2 points of water damage. The weapon loses this property if its wielder drops it or otherwise loses contact with it.

Sahagins have been trained at birth to use tridents in hand to hand combat. They have been known to track and board trading ships throughout the generations and some have formed pirate crews to attack said ships.

Deriving from the oceans and fog, whenever a sahagin has concealment or total concealment, the miss chance of attacks against her increases by 5%.

1/day, a sahagin can shoot water out of its mouth towards a single target with an water projectile within 30 ft. The sahagin must make a ranged touch attack (+12), if it hits, the attack deals 1d6+2 water damage and must make a Fortitude save (DC 17) or be inflicted with the Drenched status effect for 1d4 rounds. This save is constitution based. Blue mages may learn this ability as a 1st level spell (Knowledge: Local DC 17).