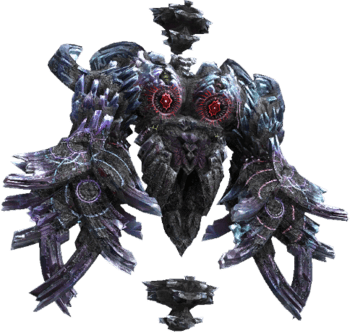 Lavender and sky blue pulses of color highlight the ridges of black crystal that envelope the two half-fused Cie’th. A honeycomb of golden energy surrounds it; while it fends off your own attempts to hurt it, the field most certainly does not stop the torrent of elemental magic it flings in your direction.– Manly Man

Up to three times per day, as a standard action, a raktavija can manifest a shield of hexagonal plates of energy that completely surrounds it. The shield grants the raktavija damage reduction 20/- and negates up to 100 points of elemental damage, applying the raktavija’s elemental resistances to the damage dealt to the shield, before dispersing. While this shield is in effect, the raktavija cannot take full-round actions, nor can it take both a standard and a move action in the same round. Blue mages may learn this ability as a 9th-level spell (Knowledge: Local DC 33).

As a standard action, a raktavija can release a burst of magic formed by the chaotic energies that hold it together. A series of 3d4 missiles are launched upon any enemies within 60 ft. of the raktavija’s choice, each one dealing 5d6 damage of a random element, determined by rolling a d10: 1 = fire, 2 = ice, 3 = wind, 4 = earth, 5 = lightning, 6 = water, 7 = holy, 8 = shadow, 9-10: non-elemental.. No more than five missiles can be made upon a single target. The missiles strike unerringly, even if the target is in melee combat, so long as it has less than total cover or total concealment. Specific parts of a creature can’t be singled out. Objects are not damaged by the ability. Blue mages may learn this ability as a 9th-level spell (Knowledge: Local DC 33).

Raktavijas are held aloft by two large chunks of crystal that hover just above and just below it. This gives it movement as though it was under the effect of a float spell; this effect cannot be dispelled.

Ever ready for creatures to slay, raktavijas are always to be found with their inertial barrier erected. They begin by tossing around their spells, making use of all the metamagic they can while doing so, and then start to barrage any of their enemies who suffer from the Imperil status. All tactics are abandoned in favor of renewing their inertial barrier if it falls, even if it costs them an opportunity to kill.