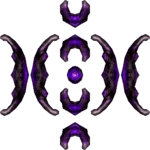 Once every 1d4 rounds, a shadow elemental can drain the blood from a target within 30 feet. The target must make a Fortitude save (DC 15) or take 1d8 points of shadow damage and the shadow elemental is healed for that much. Blue mages may learn this ability as a 1st level spell (Knowledge: Planes DC 17).

When a shadow elemental deals shadow damage to a creature, that creature must succeed on a Fortitude save or be dimmed for 1 round. The save DC is listed in the elemental’s stat block and is Constitution-based.

A shadow elemental can see perfectly in darkness of any kind, including that created by deeper darkness.

Once per day, a shadow elemental reaches out with terror towards an opponent within 35 feet. The affected creature becomes frightened for 1d4 rounds. A frightened creature flees from the source of its fear as best it can. If unable to flee, it may fight. A frightened creature takes a –2 penalty on all attack rolls, saving throws, skill checks, and ability checks. A frightened creature can use special abilities, including spells, to flee; indeed, the creature must use such means if they are the only way to escape. If the subject succeeds on a Will save (DC 15), it is shaken for 1 round. Blue mages may learn this ability as a 1st level spell (Knowledge: Planes DC 17).