A vivid blue-colored mantis. It lives not only in grassy areas, but by the seaside as well. They are triggered by any sudden movements, and are known to ferociously eat even their own kind without an ounce of remorse when their environment lacks their means of sustenance. Those who have witnessed this terrifying image fear this beast may be a demon, and have thus come to call it the mantis devil. 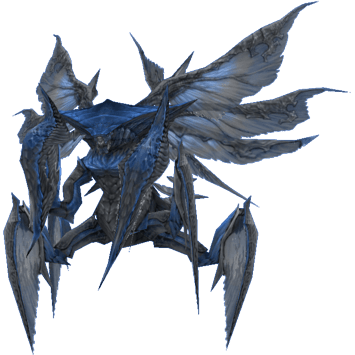 5/day, a mantis devil can attack with both of its claw attacks. If any of the claw attacks hit, it receives half of the damage back as health.

A mantis’s limbs are capable of reaching much farther than normal for a creature of its size. As a full-attack action, it can make a single attack with its claws at double its normal reach. When a mantis attacks with a claw in this manner, it gains a +4 bonus on its attack roll. A mantis cannot make attacks of opportunity with its lunge.

A mantis that grabs a foe can make a bite attack against that foe as a secondary attack. The mantis’s bite is a +15 attack that inflicts 1d8+2 points of damage on a hit.

A mantis’ claw attacks have an increase critical range by 1 and damage size increased by 2.

3/day, a mantis devil can attack with both of its claw attacks. If any of the claw attacks hit, add an additional 1d6 shadow damage per hit.

A mantis is particularly adept at moving quickly when its foes are surprised. During a surprise round, a giant mantis may act as if it had a full round to act, rather than just one standard action.