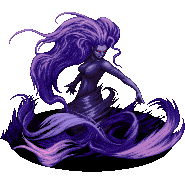 A spirit which has taken the shape of a beautiful woman. The yakshi follows the orders of its master whom it formed a blood pact with, and guards locations of great importance. They are famous for how they change in strength depending on its master’s primary emotion. In particular, yakshis that form pacts with those who holds a grudge or bears deep hatred often exhibit powers greater than other yakshis, but because they all look alike, it is hard to tell how strong they are, so facing them without proper preparation is an unwise decision to make.

The yakshi can surround a creature in a thin layer of magically viscous water. A target that fails the Reflex save (DC 24) becomes entangled and must hold its breath or risk drowning. The target or an adjacent creature can spend a full-round action on its turn scraping off the clinging fluid, allowing a new Reflex save with a +2 bonus; otherwise, the effect lasts for 1d4 minutes. Blue mages may learn this ability as a 1st level spell (Knowledge: Nature DC 17).

All creatures within a 40-foot radius from yakshi must make a DC 23 Will save or have their water and shadow resistance dropped by 10 for 1d4 rounds. Whether or not the save is successful, that creature cannot be affected again by the same yakshi’s dark aqua dome ability for 24 hours. The save DC is Charisma-based.

A yakshi is always in liquid form. She gains immunity to critical hits, poison, and sneak attacks. She also has DR/15 magic. She retains her own base speed, and her swim speed doubles to 120 feet.

1/day, a yakshi can release malevolence from within draining the health of all nearby enemies within a 30-ft.-radius spread. A yakshi deals 12d6 points of shadow damage and is healed by half of the total damage done unless those in the area must make a Fortitude save (DC 24) to negate the heal affect and take half damage. Blue mages may learn this ability as a 9th level spell (Knowledge: Arcana DC 33).

Yakshi sings a mesmerizing song that charms all those nearby her. Creatures within 30 feet of yakshi must make a Will save (DC 24) or be charmed for 1 minute. Blue mages may learn this ability as a 4th level spell (Knowledge: Arcana DC 23).

A yakshi adds her Charisma modifier as a racial bonus on all her saving throws and as a deflection bonus to her AC.