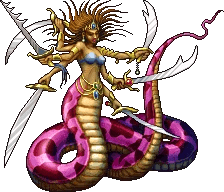 Golden hair, skin of the most brilliant scarlet, and orchid and crimson scales take up your field of vision as this six-armed snake-woman closes in, her blades aflame and her hissing voice full of venom.– Manly Man

This Burst Mode eases channeling Marilith’s infernal magic through her arms and increases its power. For a number of rounds equal to 1 + 1 round for every four HD, Marilith may use her spellstrike ability twice with the same standard action, casting a separate spell with each spellstrike. Alternately, she may also make a second spellstrike when making a full attack, following the same rules. Her burn ability does not offer a saving throw when inflicting the effect upon a target, and deals 2d6 fire damage instead; the afflicted creatures can still make a saving throw afterward as a full-round action, as normal. Finally, once per round, Marilith may apply the Empowered Spell feat to any spell she casts of 3rd level or lower at no cost. This limit break requires only a swift action to activate.

Marilith deals fire damage in addition to damage dealt on a successful hit in melee. Those affected by the burn ability must also succeed on a Reflex save or catch fire, taking the listed damage for an additional 2d8 rounds at the start of its turn. A burning creature can attempt a new save as a full-round action. Dropping and rolling on the ground grants a +4 bonus on this save. Creatures that hit a burning creature with natural weapons or unarmed attacks take fire damage as though hit by the burning creature and must make a Reflex save to avoid catching on fire.

Marilith can swim freely through lava, magma, molten metals, and other such liquid-hot materials, as though they were water. She is treated as having the amphibious monster ability while swimming in such environments, and is at no risk of drowning in them.

Marilith takes no penalties to her attack rolls from fighting with multiple weapons; this does not negate the penalties accrued by spell combat.

Marilith can, as a standard action, condense the inner heat of her enemies to lay them low. She makes a ranged touch attack with a range of 60 feet; if successful, the target is reduced to -1 hit points and stabilized (no save) after making an attack action, standard action, full-round action, or move action more than their base speed. The target of the spell can dispel this effect when taking ice or water damage before then. This ability has no effect on targets with fire immunity or absorption. Blue mages may learn this ability as a 5th-level spell (Knowledge: Planes DC 25).

This functions as the red mage ability of the same name, except that the attack roll penalty is -2.

This functions as the red mage ability of the same name.

When casting spells she knows personally (not those from items or other such things), Marilith can fulfill the somatic components of spells by brandishing the weapons she has in hand instead of needing a free hand. This does not let her ignore somatic components entirely, like the Still Spell metamagic feat; she still can only cast spells if her hands are free or occupied by weapons.