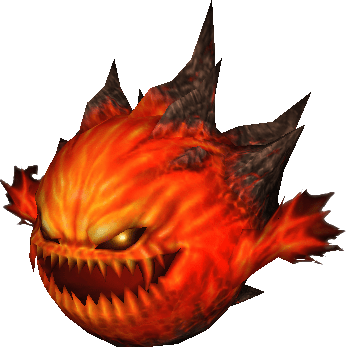 This bomb is a larger version of itself and makes itself known to be king of the bombs. The king bomb will not self-destruct until it dies making many other bombs from its remains.

The king bomb releases a powerful nuke ability within a 100 feet away. Creatures within the 30 foot area of effect take 15d8 points of fire damage (damage may vary on the type of elemental bomb) and are inflicted with the Burning status for 16 rounds. A successful Reflex save (DC 22) halves the damage and negates the status effect.

A king bomb has the Float (always floating 5 feet into the air) status effect continuously unless unconscious or dead. This effect cannot be dispelled.

After the king bomb reaches 0 hit points or lower, it explodes as an immediate action, destroying itself and dealing 16d6 points of elemental type and physical (half & half) damage to everything within a 30-ft.-radius (Reflex save DC 23 for half dmg). After its own destruction it creates 1d6+1 T1 bombs in its place. Blue mages may learn this ability as a 1st level spell (Knowledge: Planes DC 17).